Behind the Scenes with our very own digital designer Scott! 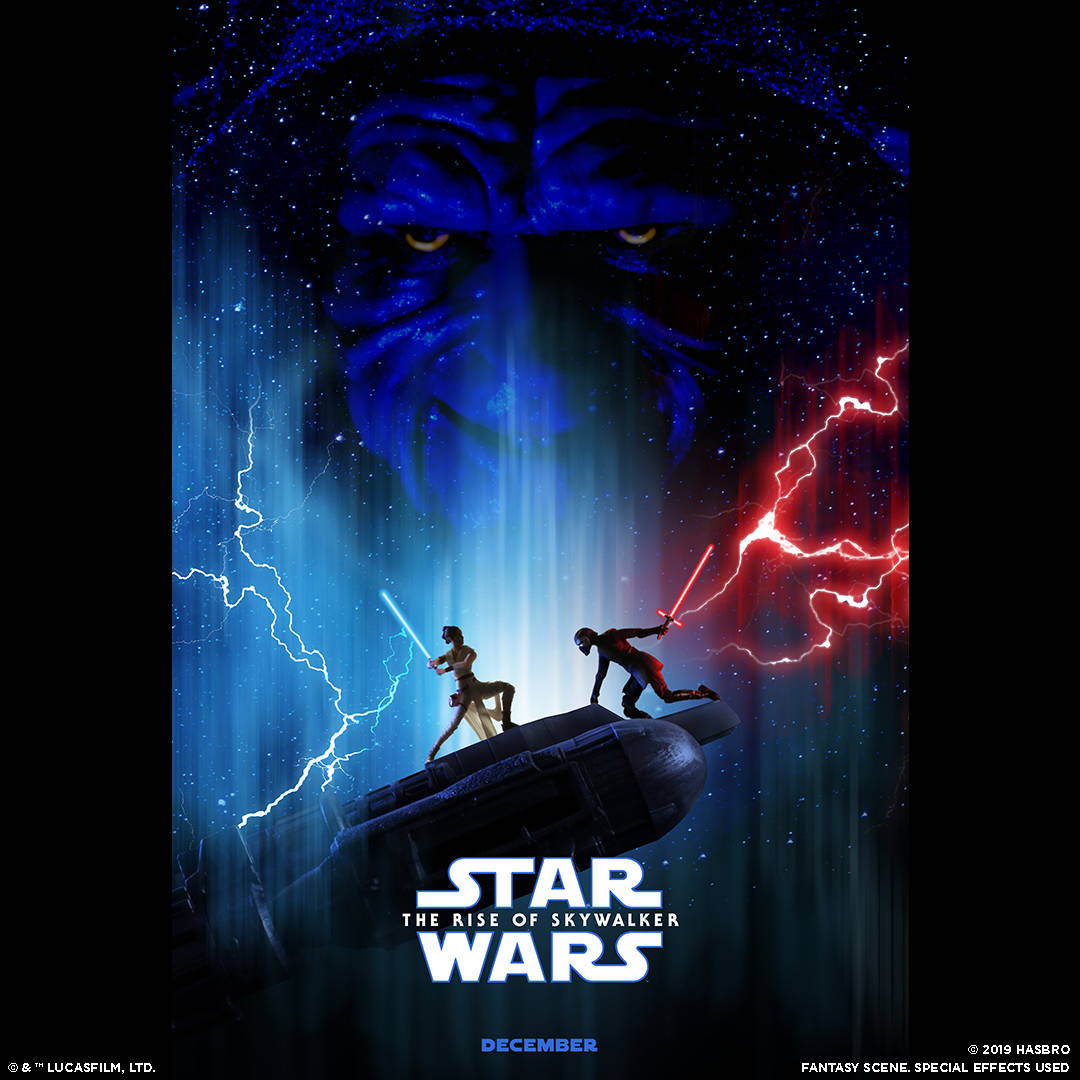 Scott, this photo is so incredible - I can't believe those are our action figures and how true to the movie poster it is! What is your role at Hasbro?

I’ve been at Hasbro for almost three years as a Digital Designer/Creative Swiss-Army knife on the social media team. I collaborate with my Creative Director and team to create much of the social media content you see across our brands, including Hasbro Pulse.

I’m a huge Star Wars fan as well as several of the other properties I’m fortunate enough to work on. Toy photography is something I really enjoy tackling; I love to experiment with new ideas and techniques. I follow many really talented Toy Photographers on social media who up the game continuously and I hope to bring that level of expertise to Hasbro Pulse. 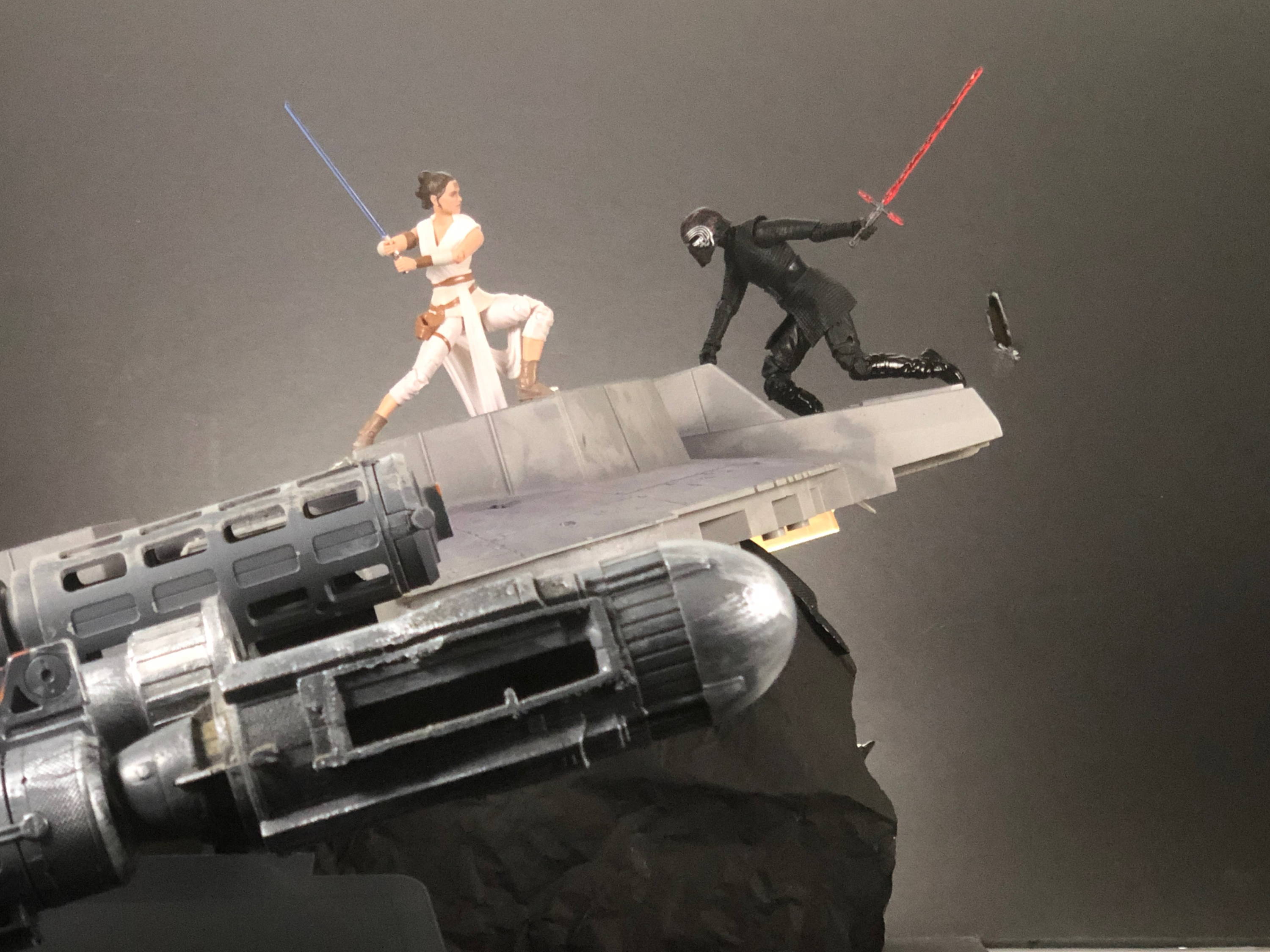 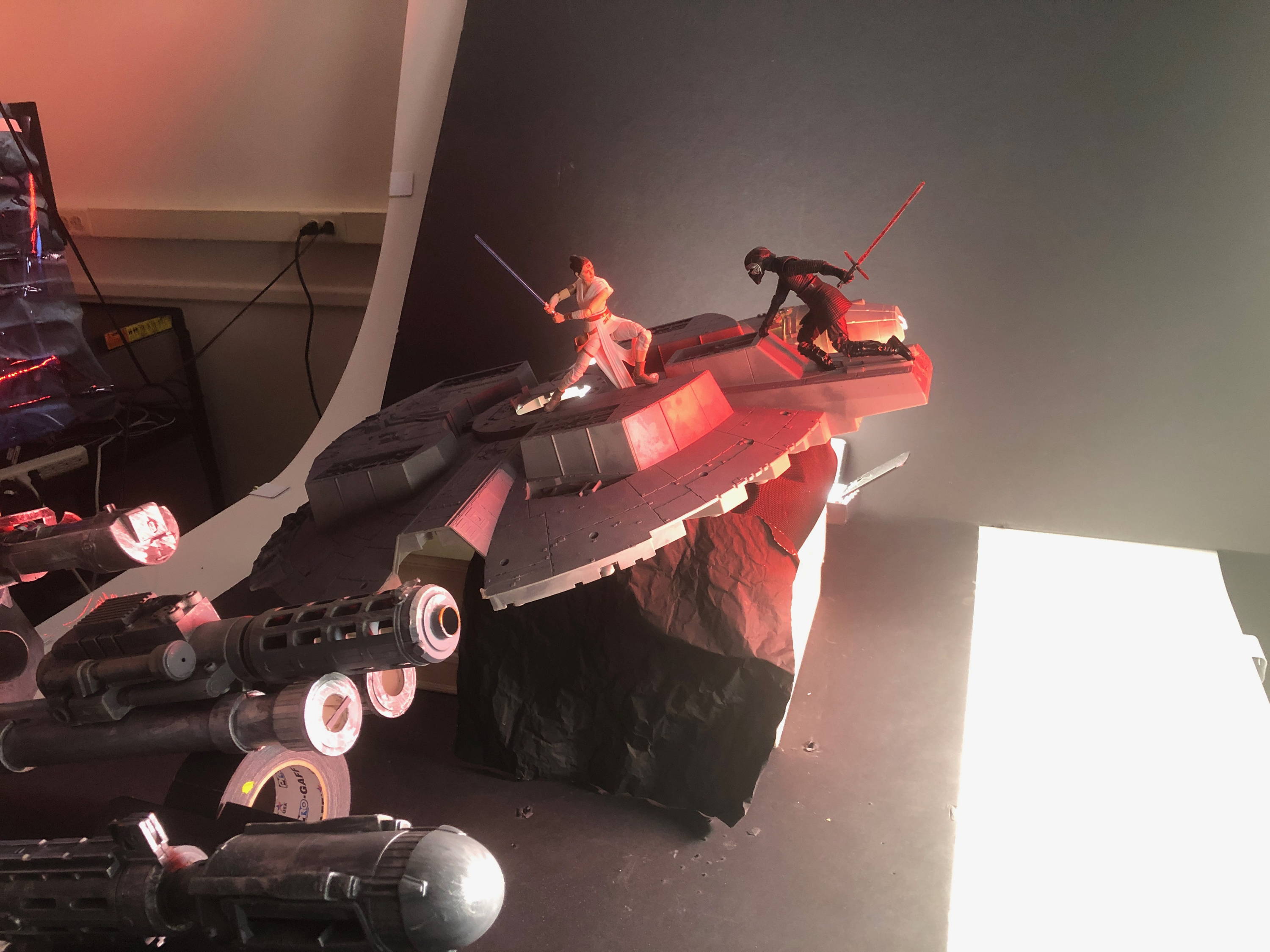 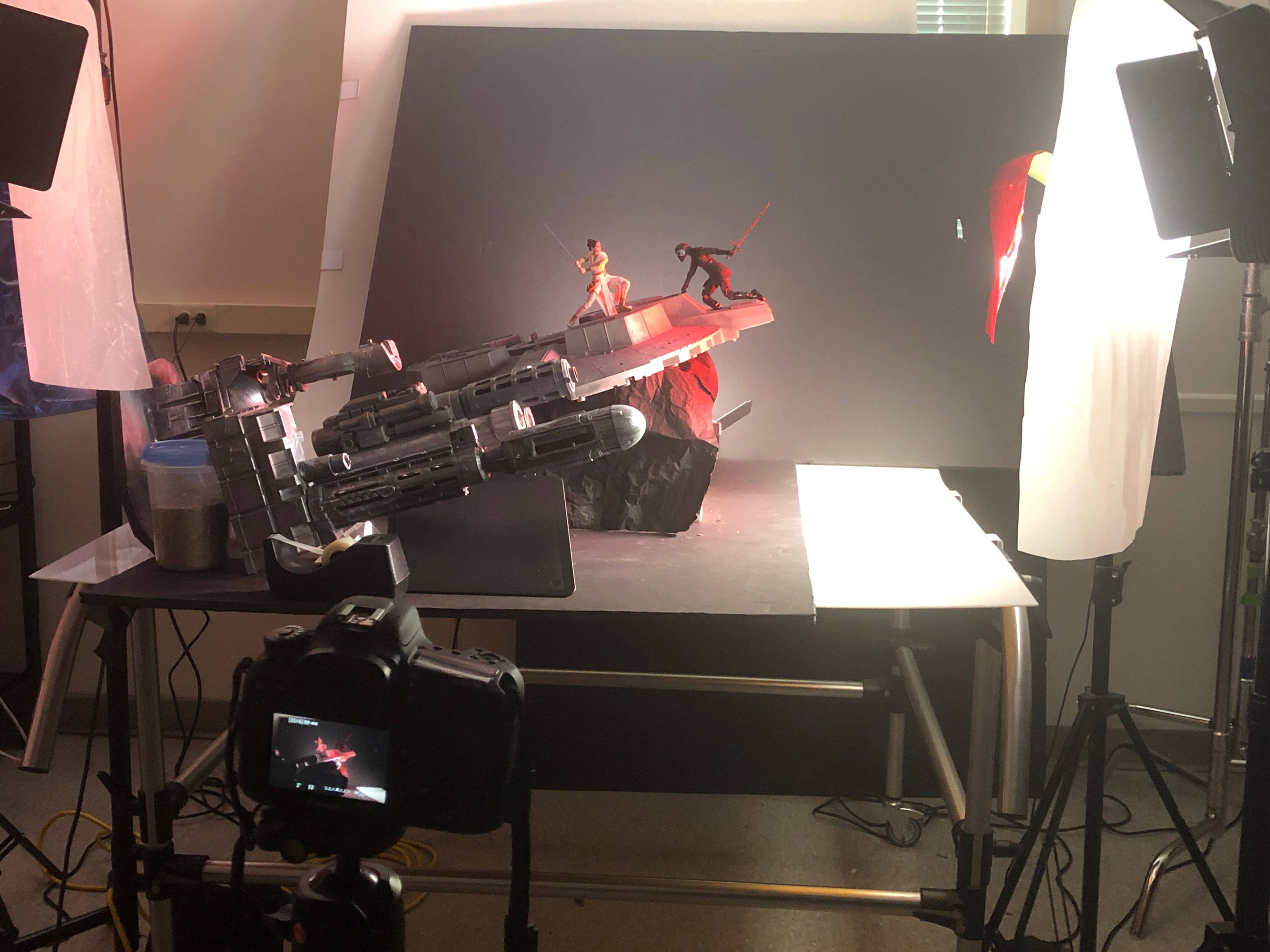 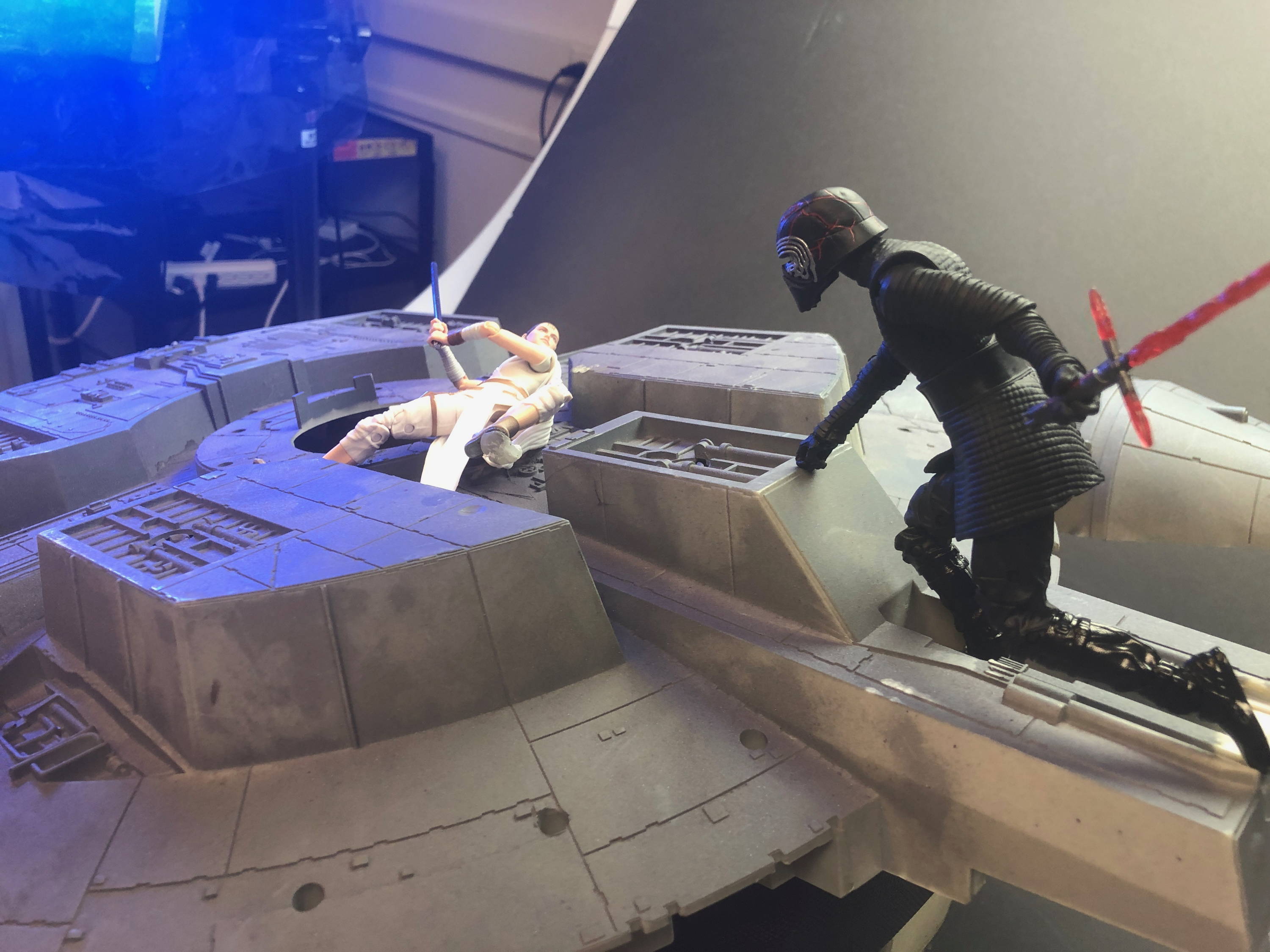 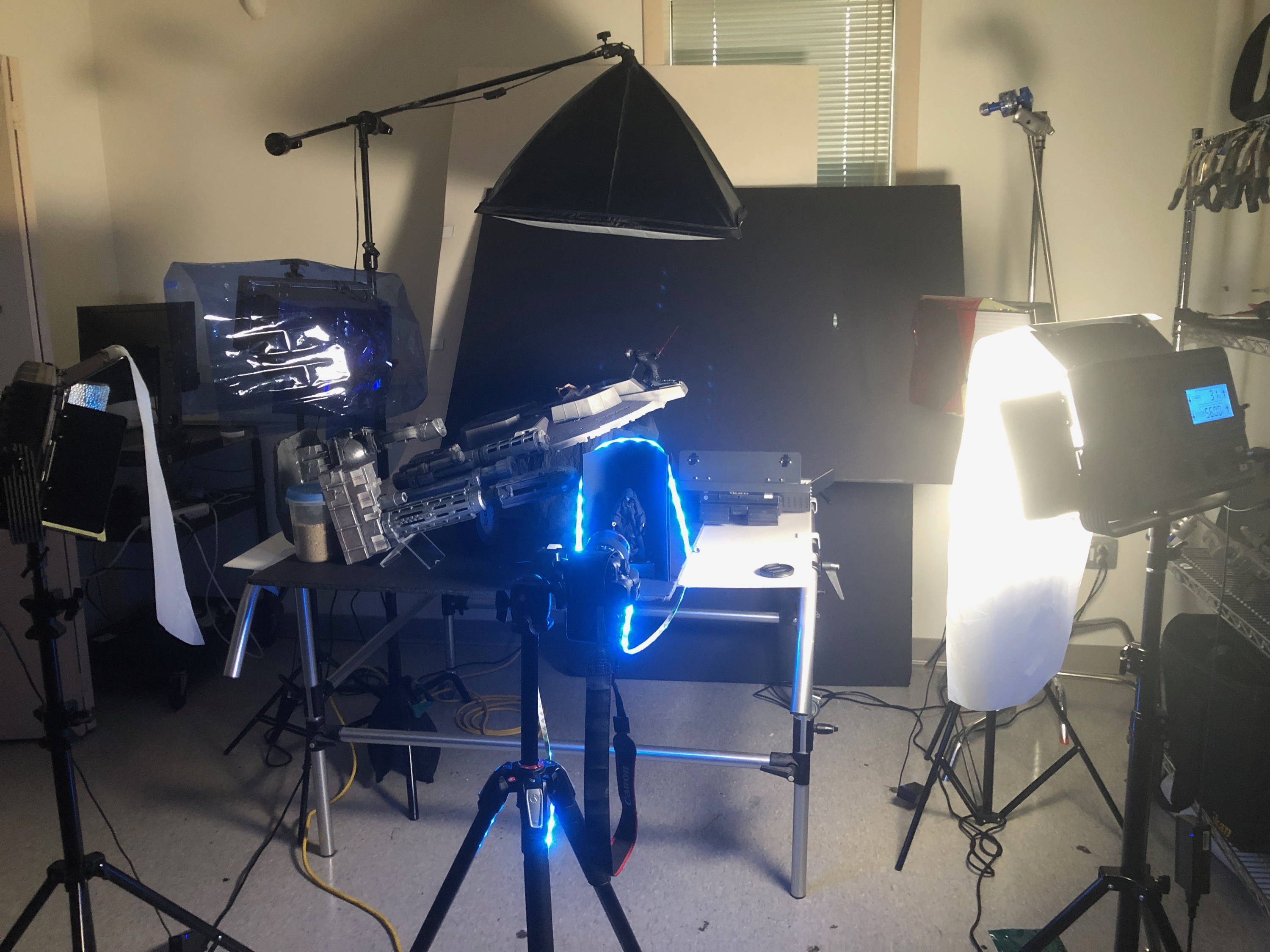 What does this assignment mean to you as a fan, especially now that the original Star Wars saga is reaching its conclusion?

To see the Star Wars saga come to its conclusion is very bittersweet for me. The stories were foundational to my youth and shaped my understanding things like right and wrong. My first child was born shortly before Star Wars: The Phantom Menace so my wife and all three kids are fans too. We go to every opening night together and have made some wonderful memories. To have this story end is tough, but amazing too. I’m eager to see whatever comes next in this universe

What are some of your favorite Star Wars memories, and how have they inspired your art?

My absolute favorite memory was after seeing the first Star Wars movie when it was re-released in 1980 (I was 7) to remind people before Star Wars: The Empire Strikes Back premiered (keep in mind this was before home video and WAY before streaming). I was absolutely BLOWN away by the entire film. My younger brother was crying as we left and my mom asked him what was wrong. He replied, sobbing “CHEWIE DIDN’T GET A MEDAL!” So my mom said that Han’s medal was going into a display cabinet on the Falcon because it was for both of them. He believed her and we were fans for life. As a designer Star Wars is a visually stunning universe and the aesthetic Star Wars created drives me to stretch creatively with every project.

As you can see in several of the behind the scenes images, the main platform Kylo Ren and Rey are on is the bottom half of a certain well known and heavily modified Corellian freighter shot from the side. Most of the structure and foreground texture pieces are actually NERF blaster muzzles, repainted and re-purposed. 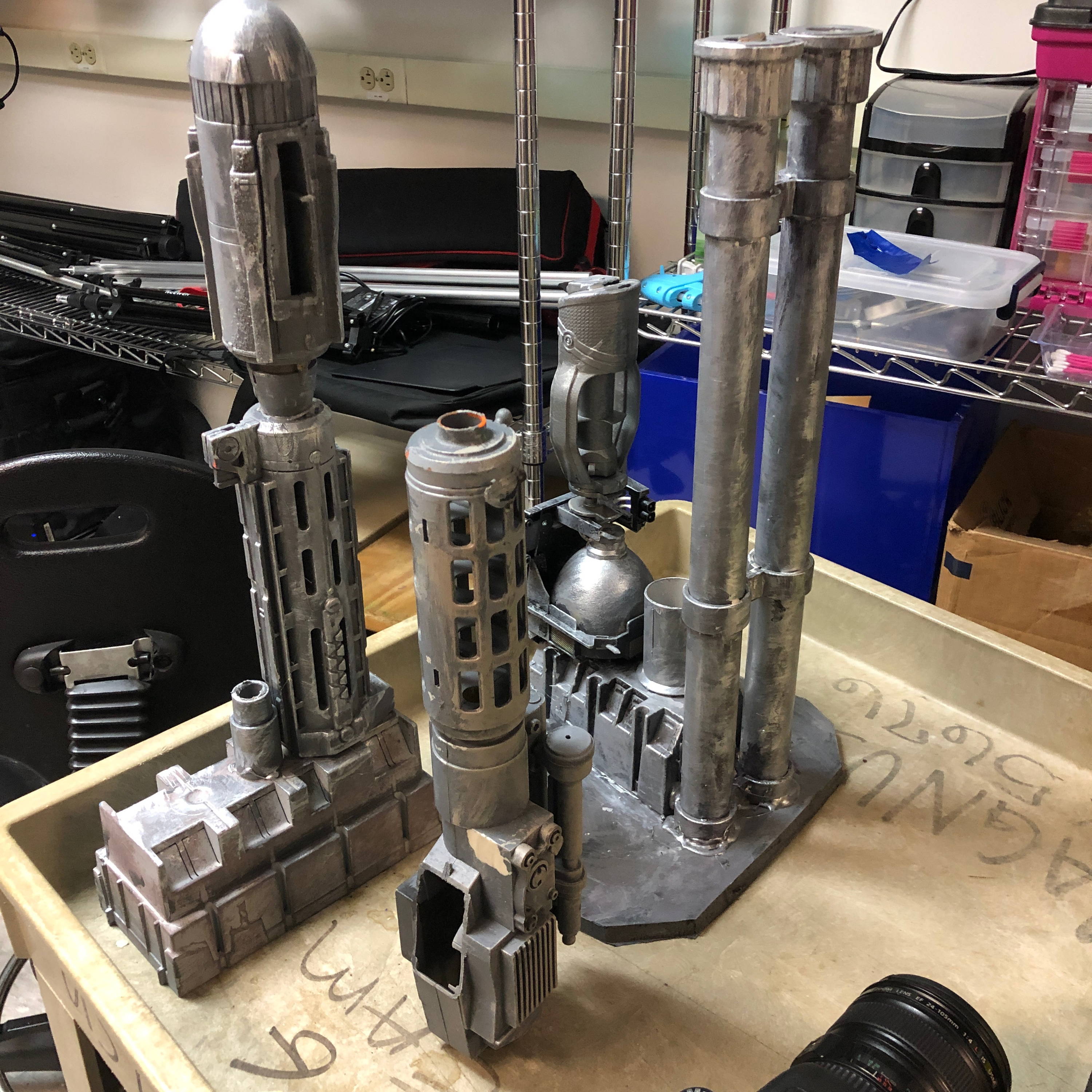 What’s the inspiration behind this shot—why was it important for you to recreate this particular scene?

This shot was a recreation of the first teaser poster Lucasfilm released for Star Wars: The Rise of Skywalker. I wanted it to be a faithful representation using Hasbro’s Star Wars Black Series figures. I was fortunate enough to work at Star Wars Celebration in April when the first teaser trailer was shown and it was amazing to feel the audience react. That experience with the crowd made working on this project particularly meaningful to me.

Walk us through the steps involved in recreating the scene. How did you create the special effects?

When I was asked to recreate the poster, I had to really think about what we had on hand to create the structure that Rey and Kylo Ren stood on. Of course one advantage of being as Hasbro is that I have a lot of products and materials to work with. I roughed out several different ideas in the studio before it really came together.

In the original poster the characters are almost entirely silhouetted against the background, but I wanted to lighten them up a bit with the light from the lightsabers so I played with some gels to get the colors in there and composited several images together for the final effect. Since I knew I’d need to drop in the Star background, Emperor, lightsaber effects, lightning and Northern Lights digitally, I just shot against a black background.

After finishing the main composition with Rey and Kylo, I shot the emperor with a blue uplight (an LED strip that changes color) and then everything was composited and added in photo editing software.

Are there any Easter eggs hidden within this photo for Star Wars fans to discover?

As you can see in several of the behind the scenes images, the main platform Kylo Ren and Rey are on is the bottom half of a certain well known and heavily modified Corellian freighter shot from the side. Most of the structure and foreground texture pieces are actually NERF blaster muzzles, repainted and re-purposed.

What are you hoping to evoke with your work?

I want people to have to look twice at this piece and ask themselves... “Wait, are those TOYS?!”

I’m so grateful that my job is to share my love for Star Wars and all the other brands I work on with fans. There is a real sense of childlike awe in doing this work and I realize how fortunate I am. I think many of you will understand when I say it is a thrill to get to do what I do. I pinch myself everyday that my job is to play, I mean work, with toys! Thanks for following Hasbro Pulse. And of course...May the Force be with you!

This is a special addition to our 8-part #HasbroToyPic/Star Wars series covering the epic battles of the Star Wars saga.