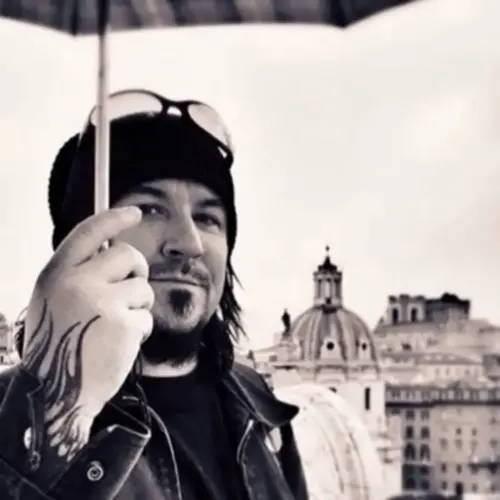 We’re talking to miQ Willmott, veteran artist of all things toys and rock and roll, about his artwork on the incredible print that can only be found inside the Pulse exclusive G.I. Joe: Classified Series Snake Eyes package. 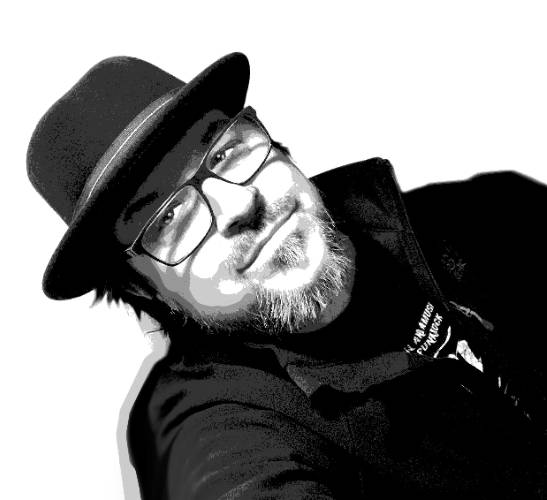 Q: Thanks for taking some time with us, miQ. Tell us about your history with the G.I. Joe brand. Were you a fan before taking on this project?

A: I started working on a variety of G.I. Joe projects over 13 years ago, after we started our design studio, TWEEQiM Creative Lab here in Portland. We were first approached to do some rock N' roll inspired T-shirts for the crew repping at San Diego Comic Con, and I think the following year, we created the packaging art for the SDCC G.I. Joe exclusive, the Destro “book box” limited edition package. That project was nuts, as it had us doing the full art inside and out, graphics, illustration, drawings….you name it. That piece came out fantastic, and ever since, we have worked on more specialty projects for G.I. Joe over the years, with a good amount of it being in the conceptual phase. Always a good time!

On being a fan, lets say that I'm old enough to have played with G.I.Joe when he was considerably larger in scale, had “lifelike hair”, and a common scar that he and all his G.I. Joe brothers shared on the same cheek. Back then, there was an astronaut Joe, and he came in this silver space suit. You could also purchase a space capsule that was a replica of the ones the real life astronauts were coming back to Earth in, back in the days of the lunar program. Because my friends and I were always “next leveling” our play with our toys, that poor Joe and the capsule were put through a lot of “test landings” including being thrown off my neighbors second story roof into his pool below. Sometimes we missed the pool. So was I a fan? Yes, the best kind...a kid who played with them and played hard.

Q: You’ve done art for some of the most popular rock and metal bands in history. What kind of music do you think Snake Eyes would be into? What’s his role in the band?

A: Good question. Considering that Snake Eyes has such a mysterious background, and is a bit of an enigma, I would think that mainstream music of the past or present would not be on his personal radar. Maybe something something super broody/moody that is more atmospheric than a head banging or finger snapping good time. Maybe something like Sunn O))), that is non-distractive, dark, almost meditative to some who get lost in their own headspace, or use this type of music to gain focus, and bring a bit of aggression to the surface. About as mainstream I would go (and they are far from it) is the Japanese trio Boris. They sing everything in Japanese, have punk, metal, doom, and aggressive jam band overtures that sometimes drift into melodic tonal noise, and lots of good old feedback. Yeah, I think I'm voting for Boris :)

Q: You put a lot of Snake Eyes-related symbolism in this piece. Can you talk to fans who might not be familiar with it and explain the meaning behind some of the more lore-steeped examples?

A:  Well the art was initially talked about as a possibility of this being a tattooed back piece that Snake Eyes might have if you ever were to see his back, in the flesh. So this piece was designed with that, precisely, in mind.

The Arashikage Ninja Clan symbol makes its appearance, as all graduates from their training receive the symbol as a tattoo. Seeing how Snake Eyes wears the symbol on his armor, I figured the tattoo might take it to a deeper level, paying attention to its legacy, hence, putting it on a scroll. The main center piece is built much like a totem, which is not typically a Japanese approach to tattoo design, but I wanted to give it a touch of Western influence, and I really wanted the characters to morph together to tell the story as a whole, as in what makes up the fabric of Snake Eyes vs. individual characters populating their own section of real estate. The top head is a wolf, or Okuri-Okami, which in brief, is an unseen protector, who could turn on you in a moment’s notice if you decide to choose the “wrong path”.

Next down is the face of Raijin, who is said to protect Japan as a force of nature, drumming up storms and turbulence (Raijin’s drum heads can be seen going up both sides of the wolf’s head). Snake Eye’s two main blades are seen crossing through the teeth of Raijin, and can be seen as a joining of the overall combined forces. Below are intertwining serpents (Cobra and Dragon), and the piece is framed up with the elements of water, fire, and air which not only symbolize the force and movement of Snake Eyes, but also traditionally symbolize change, adaptability, and survival in Japanese tattooing.

There are a few other little details in the piece, but those will remain my closely guarded secret ;) 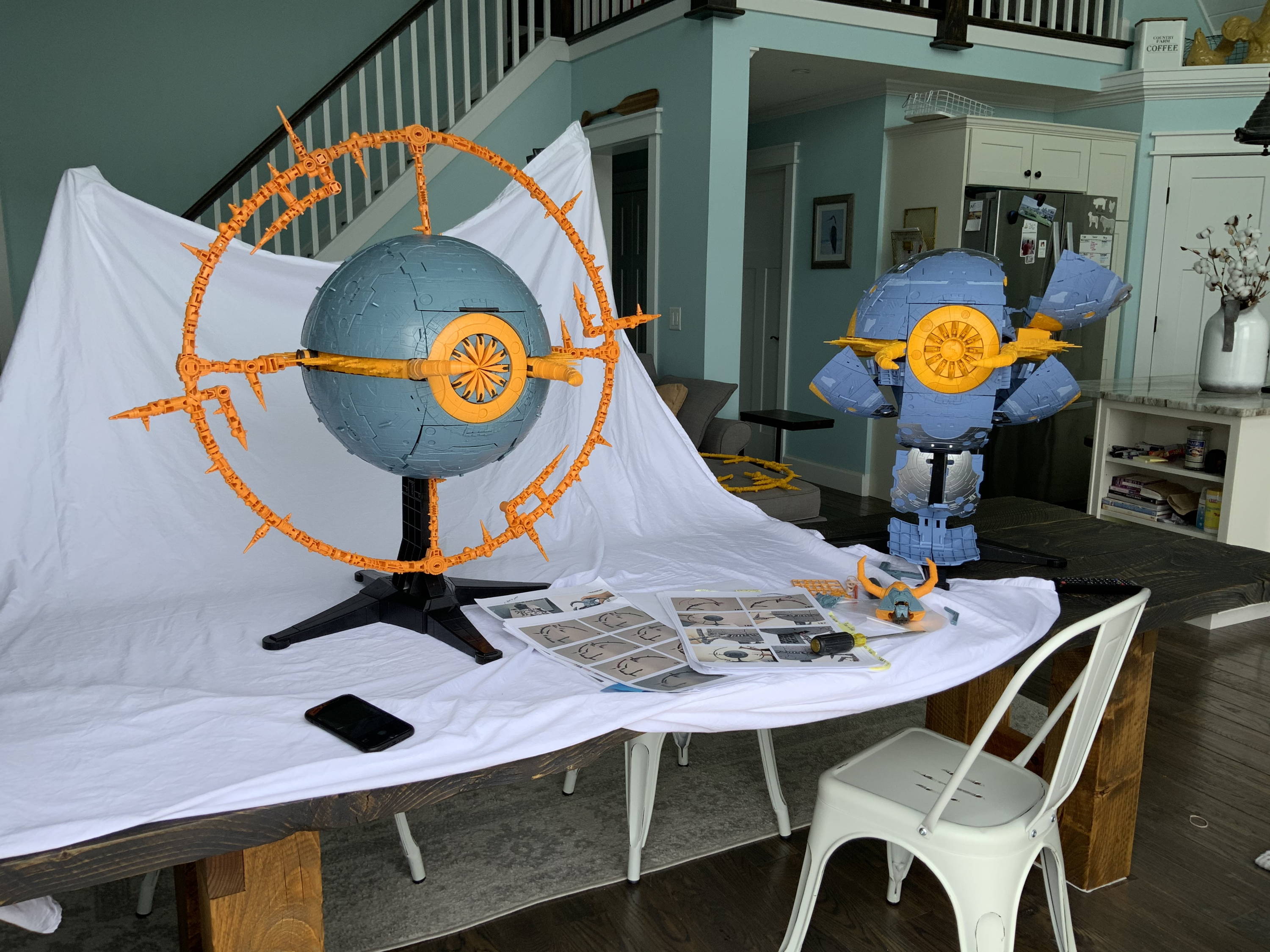 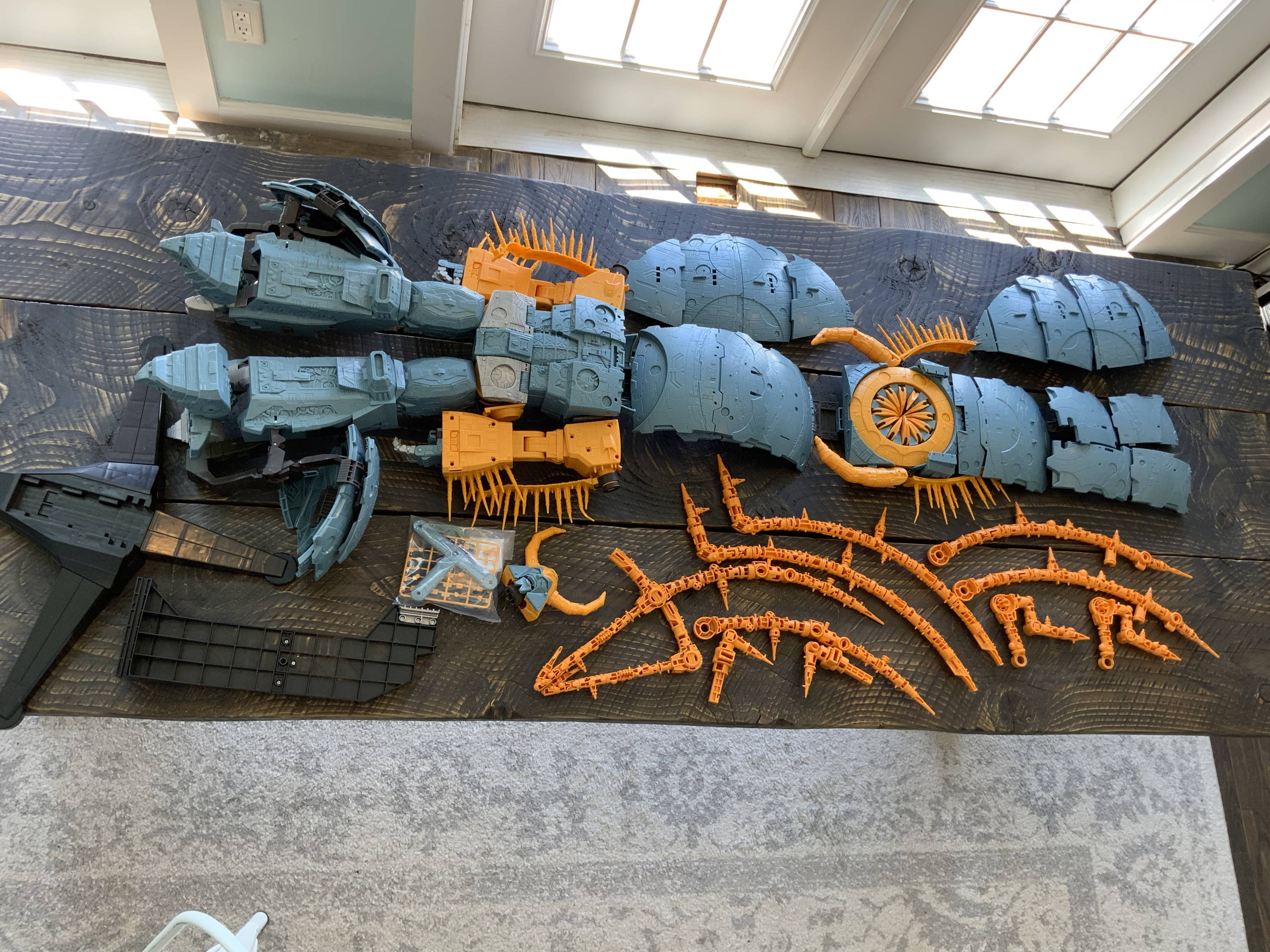 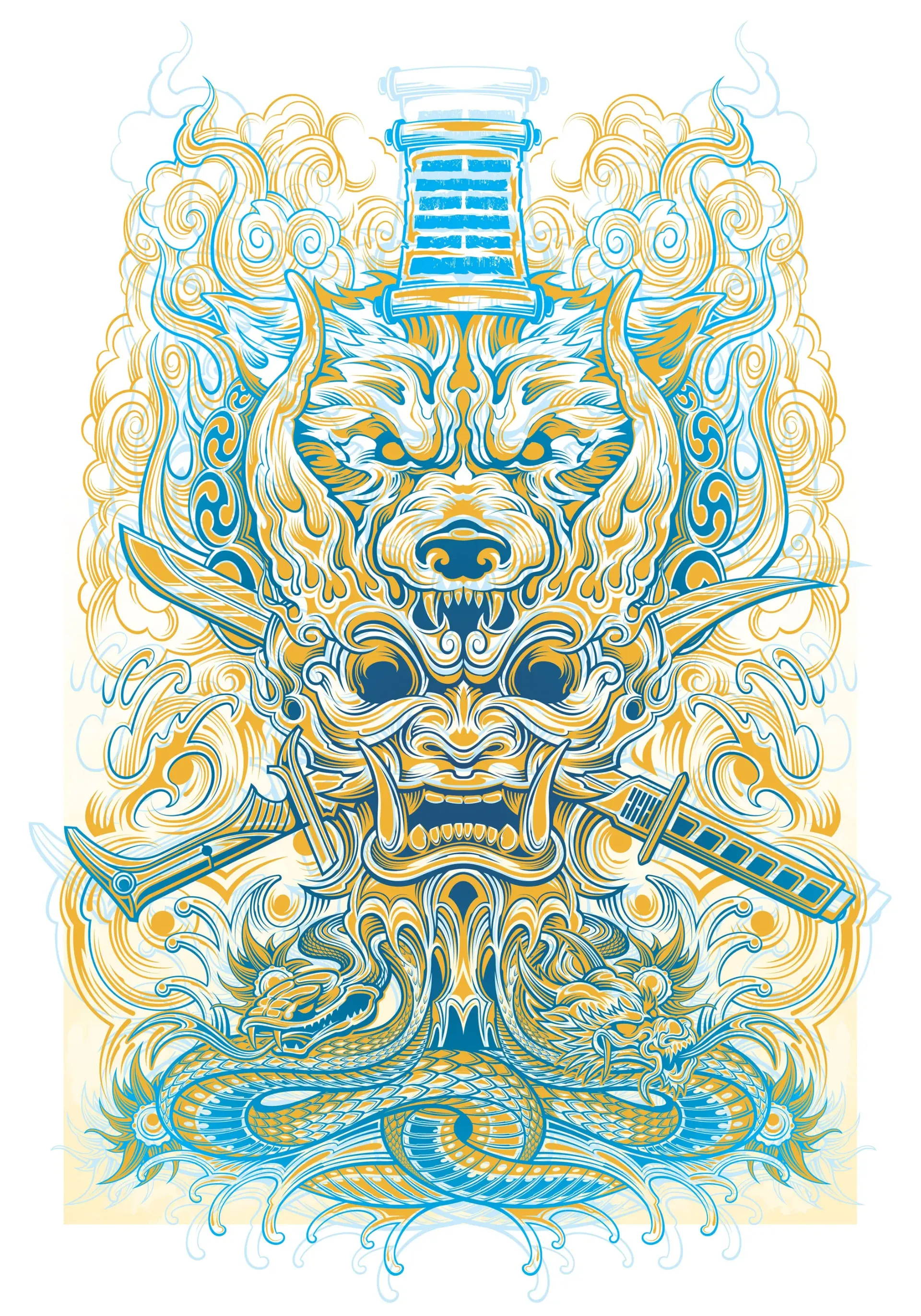 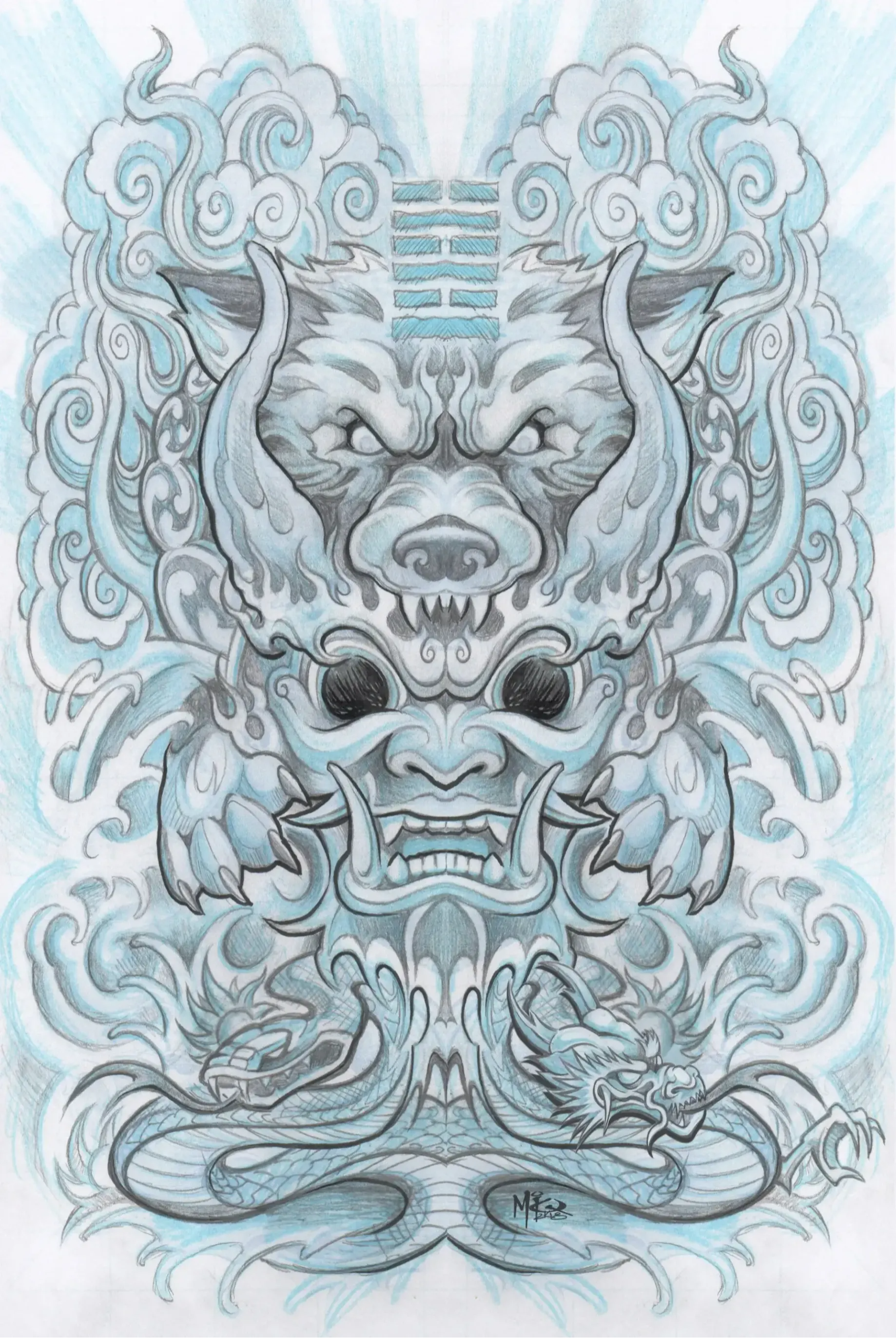 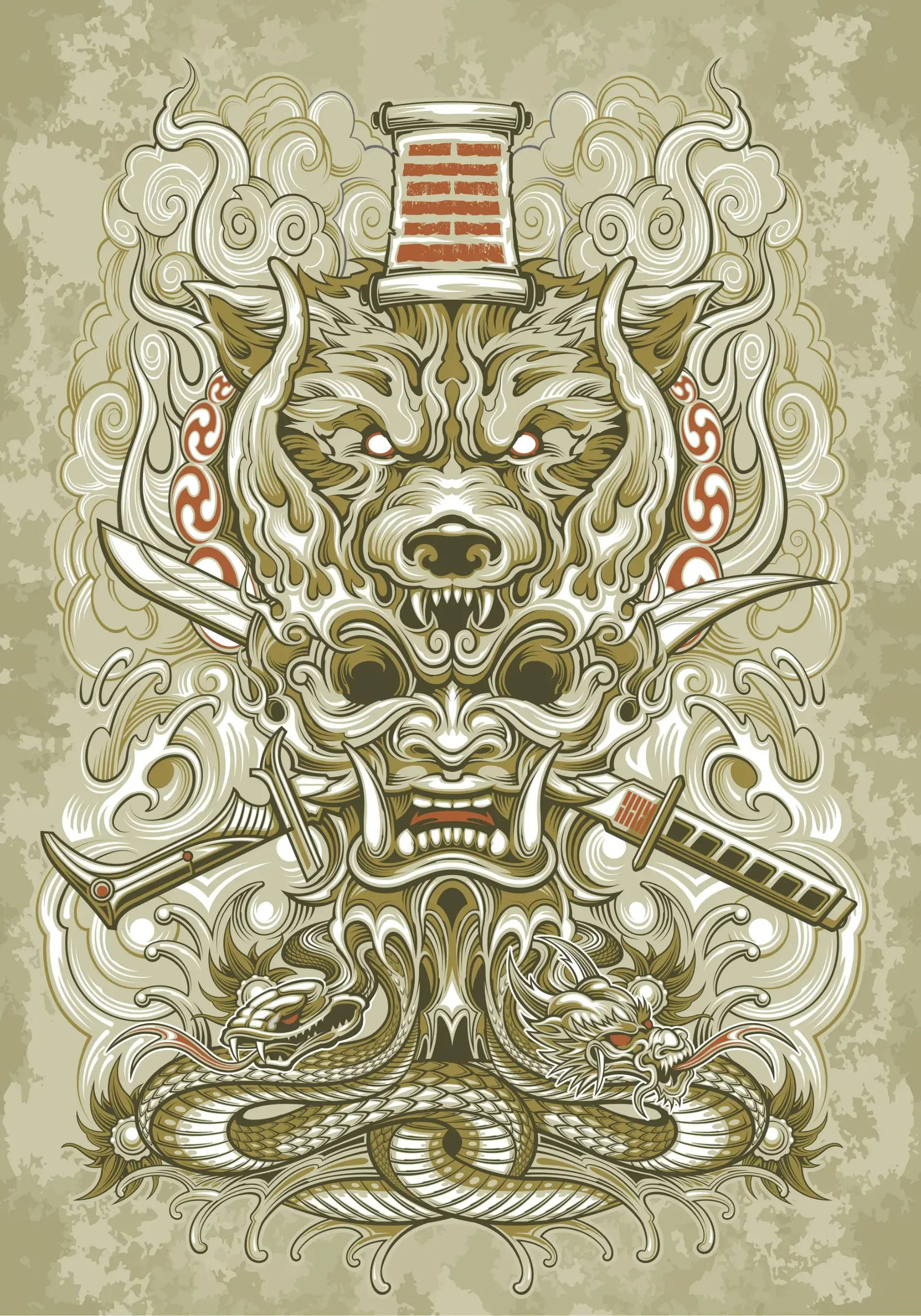 Q: Were there any ideas you wanted to use that didn’t make it to the final piece?

A: When we first discussed this being a tattooed back piece, as usual, my head went spinning into all the detail I could possibly get away with, so of course there was a whole lot more I wanted to inject into the story telling. The more we discussed the real estate that this might be applied to (considering that originally, this was potentially going to be an application that would end up on the physical toy itself), we decided it best to approach it with a more centric piece with the bold focus on the elements “up the spine” of the piece.

If we would have put much more into the piece, we would have potentially had legibility issues as smaller scale. So yes, there was intent, but we didn’t go that route...but my interest was really about putting some regional and personal back story in negative spaces where some of the elements (water, fire, air) might have opened up and revealed like distant memories. But with Snake Eyes being such an enigma, it might have been giving too much away, or I would have had to author a mythos that simply does not exist. So while I wouldn’t say we played it safe, I'd say that much more might have created an opening of a can of worms that is not ready to be opened. I'm really happy with its “simplicity”. 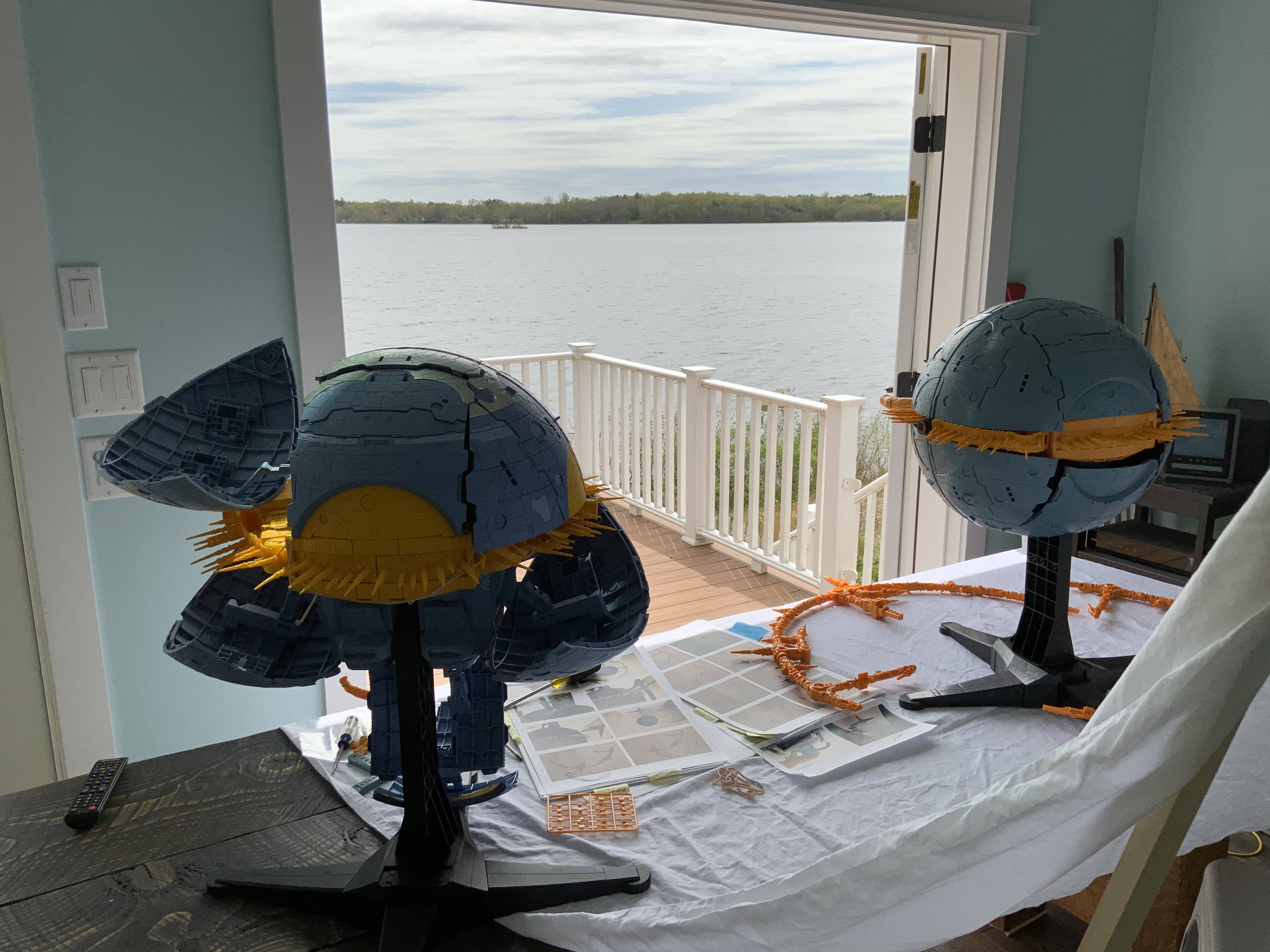 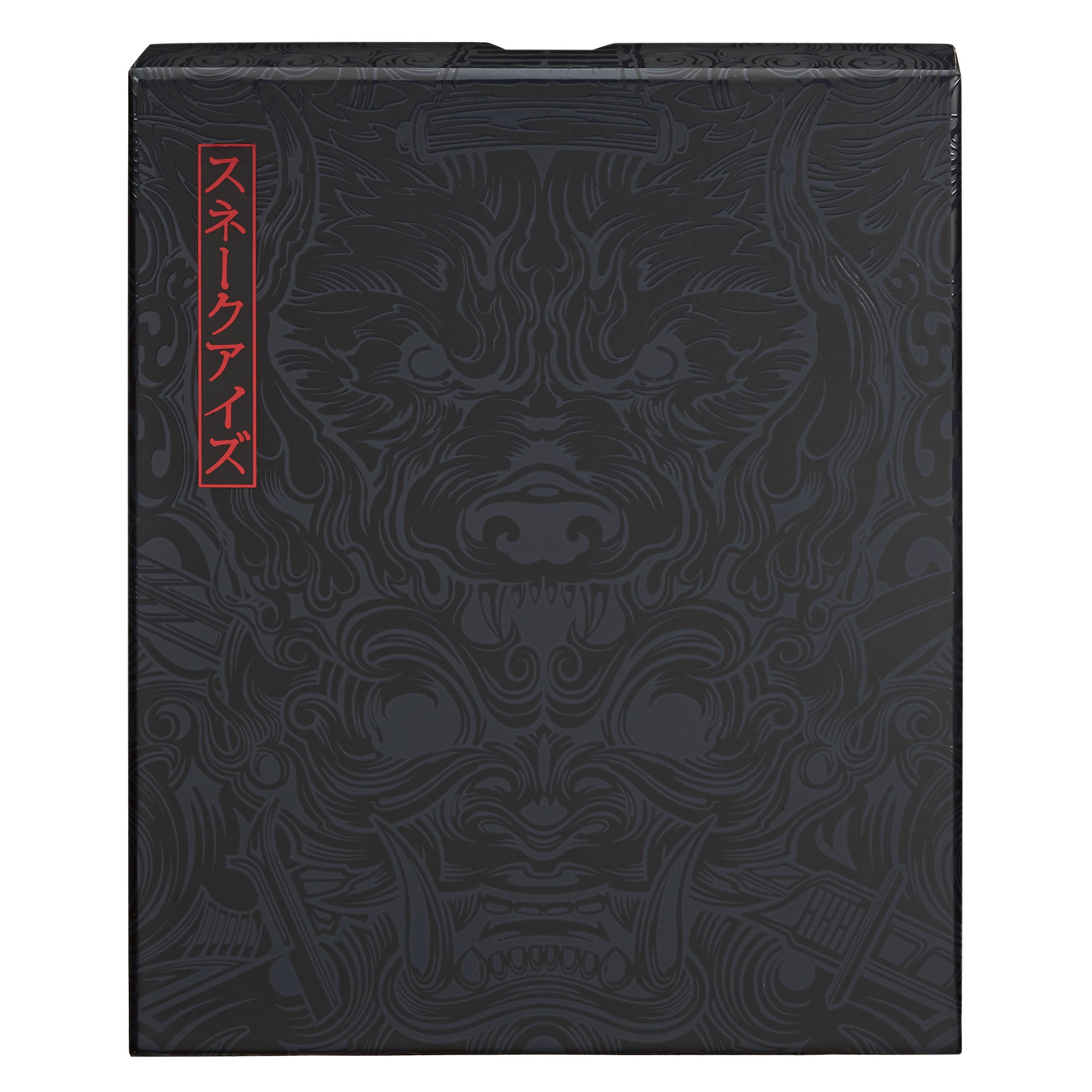 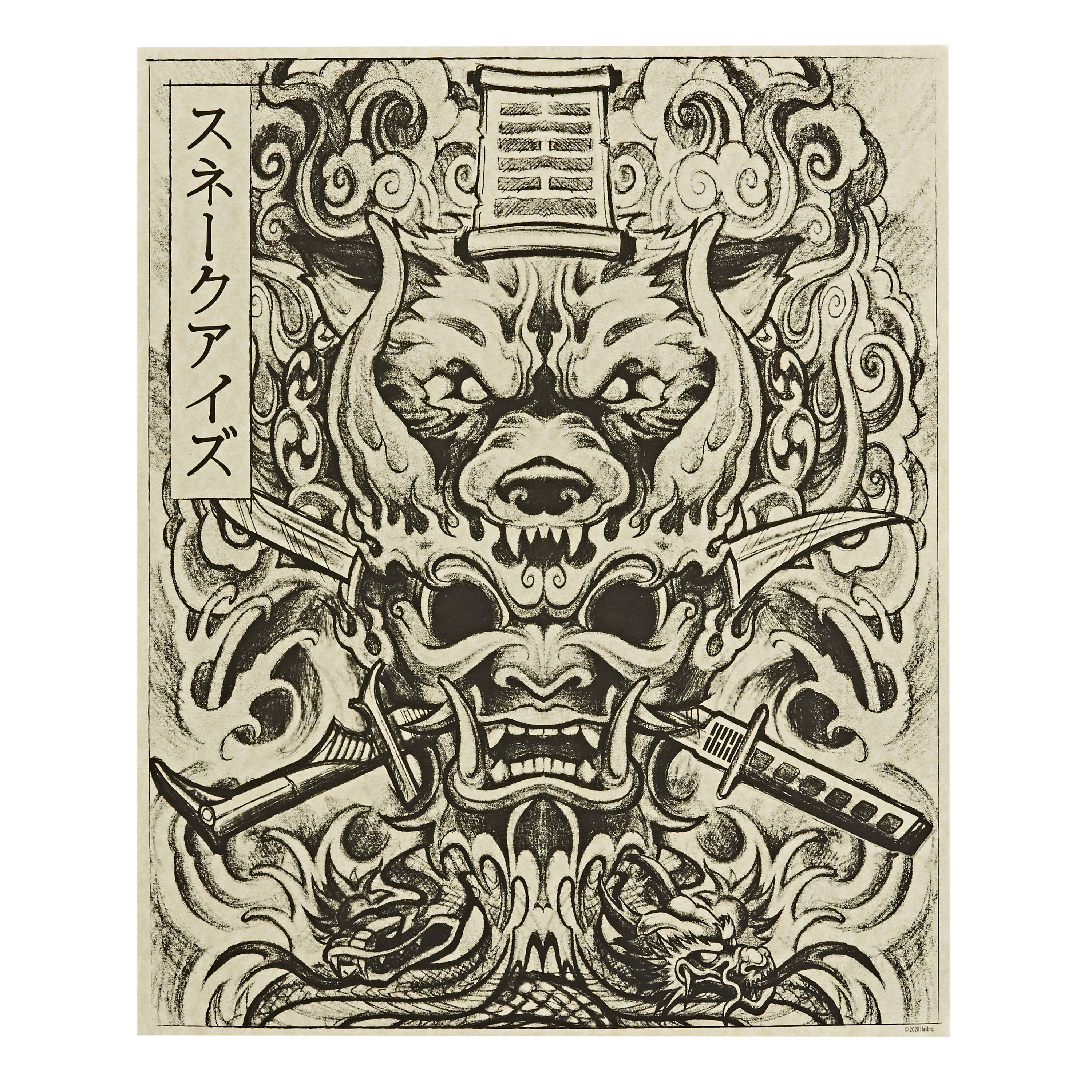 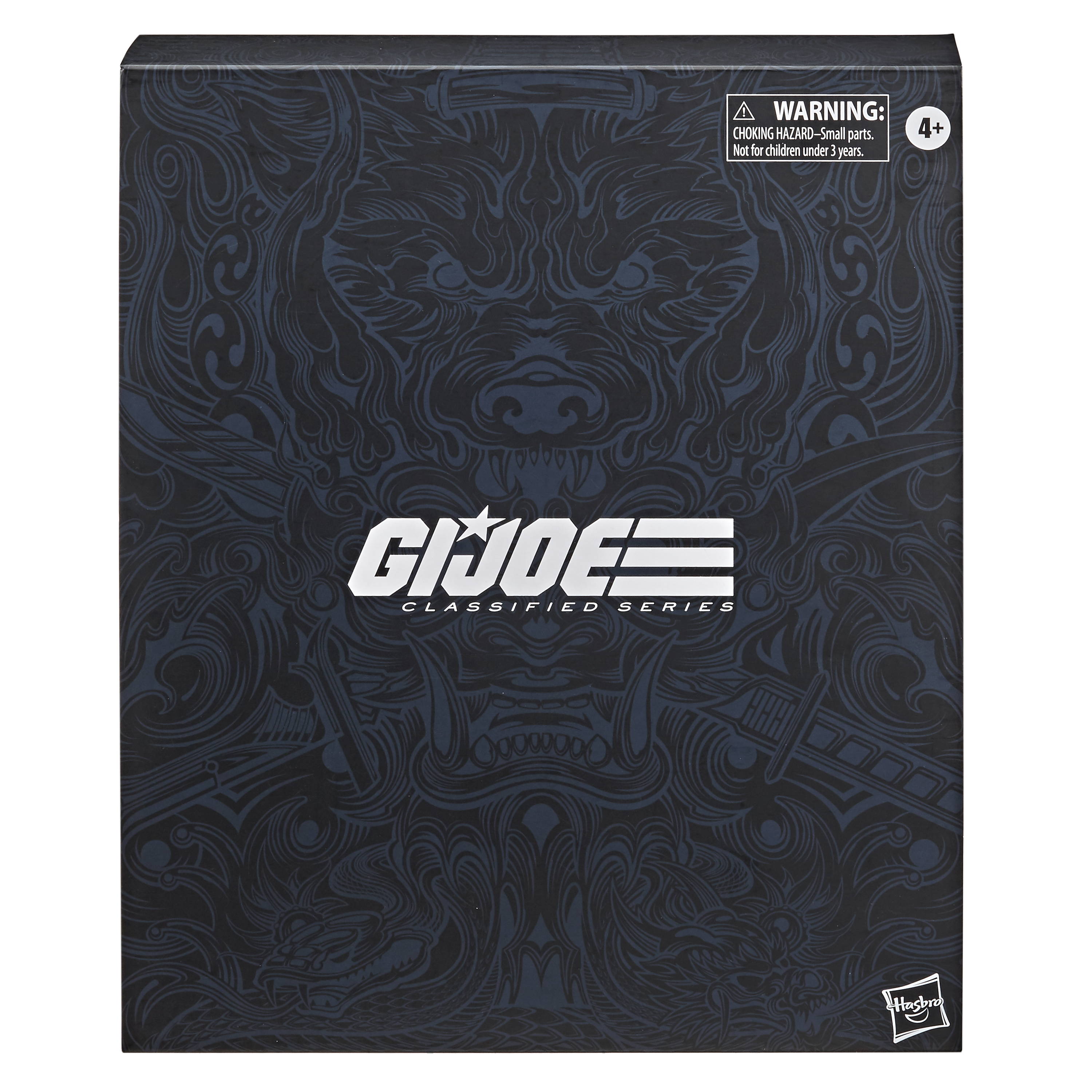 Q: With your history and experience working on other toy lines, did your approach to the Snake Eyes piece differ from projects you’ve worked on in the past?

A: Well, I've worked on A LOT of different “canvas” shapes in my career, that’s for sure. My approach to any canvas, be it toys, sneakers, apparel, skate decks, packaging, etc. has always been to make the shape of the canvas (product itself) a part of the art piece itself. To let the limitations of the area you have to work in, not be a limitation at all. I work with the body lines of the canvas, so the design works WITH the shape of the surface organically.

I'm not a fan of the copy and paste a style guide element into a template approach. I treat every single design as a piece of art, and each piece has it own unique canvas shape. With this piece, given that it was originally conceived as a full back tattoo, I worked with a template I created from scanning a photo from one of my books on tattoos of the Yakuza, and started drawing away. The original roughs actually had elements spilling up onto the shoulders and going down onto the buttocks, much more like traditional Yakuza tattoos, which were a big influence on my approach with this.

Q: You and your wife form a powerful creative team. Did she have any input on the project? What were her thoughts on the finished art?

A: Thank you! My wife Thuy (the TWEE in TWEEQiM) is indeed a creative force in everything we do. We work through projects together, trading off phases of the work, as well as co-art direct each other when we are off on our own projects that suit our individual styles better. Our approach Is much like our logo, which is based on the Yin Yang principal. Thuy brings the grace and elegance to our work (like the butterly wings in our studio logo), and I bring the punch in the face (like the atom bomb between those wings). So she handled the flow, and I handled the mojo. When all was said and done, we ended up with a piece that had both our kids asking if they can get it tattooed when they grow up, so we know we did it right……but the answer was still, no.

This project was a true honor to work on (and got to work once again with our fave design guy in the toy industry, R.Dube), and from what we have seen, the final project as a whole came out fantastic, and we cant wait to get our claws on one! Thanx Has-Bros! 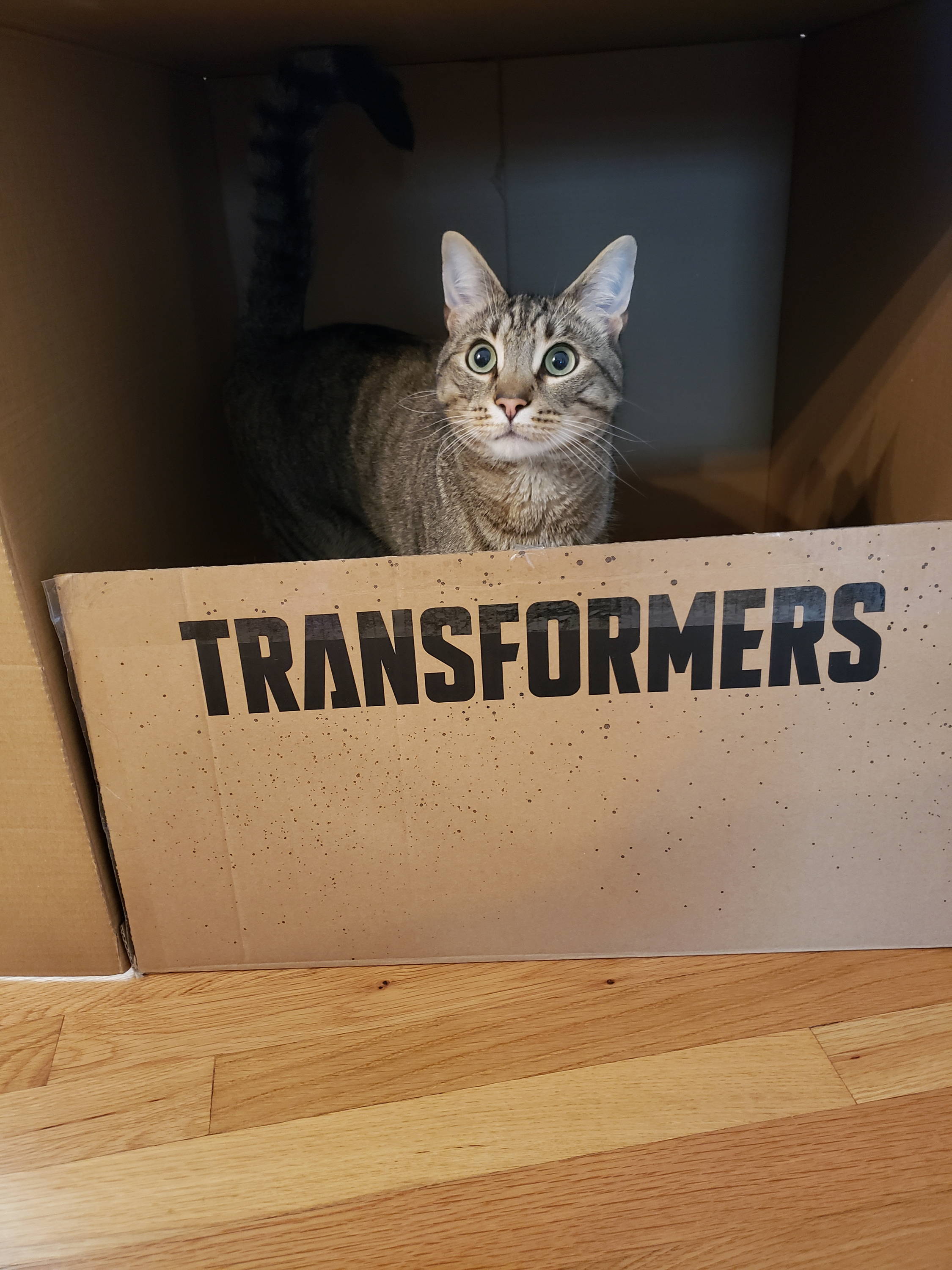 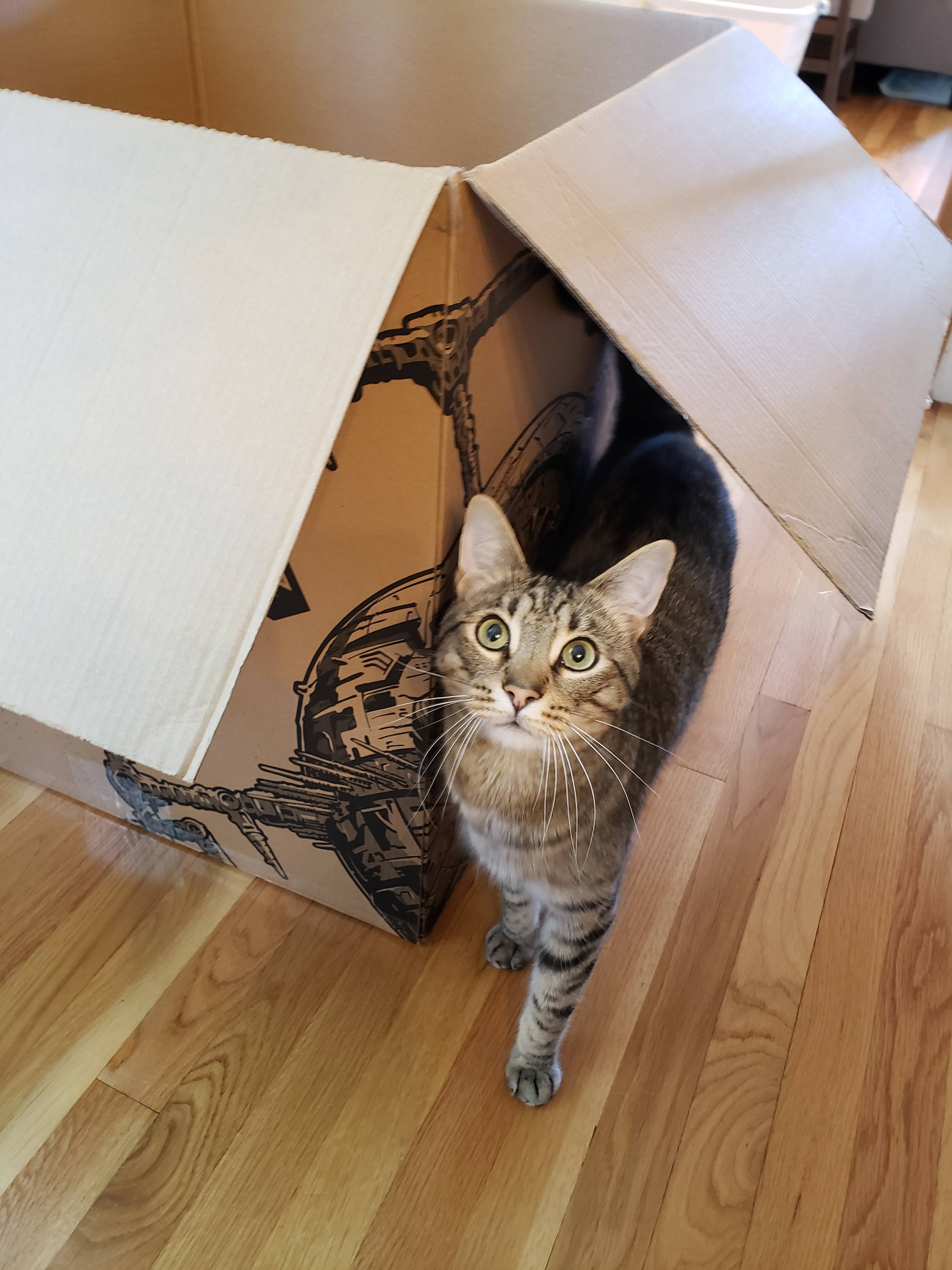 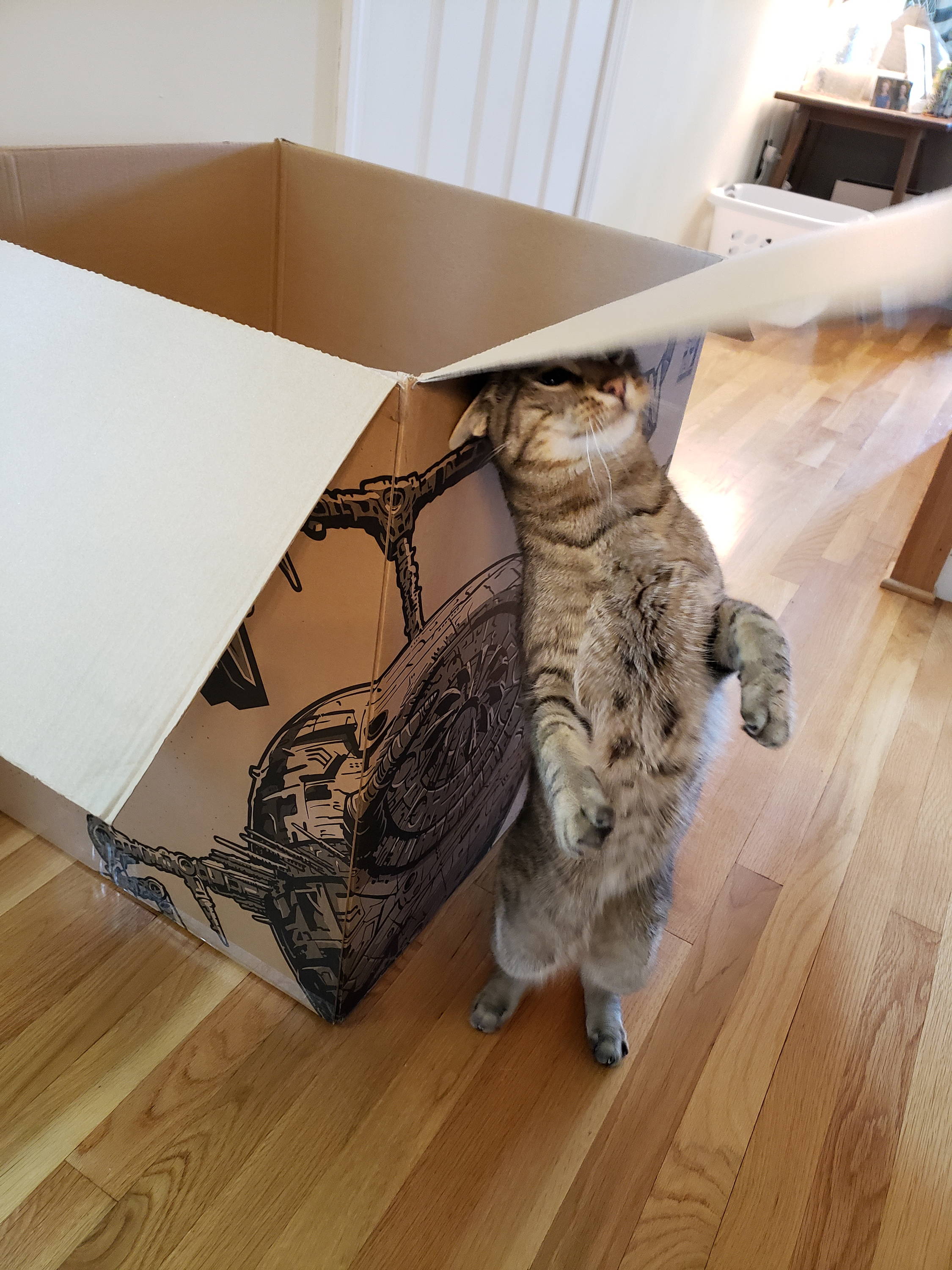 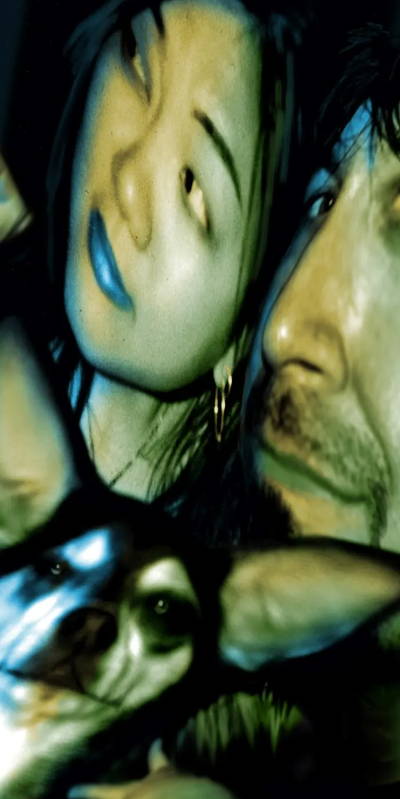