We caught up with Transformers Engineer Mike B. who’s worked on the massive Constructicon combiner project since its inception. In this exclusive interview he shares insights into the process, his greatest challenges working on the project, and tons of behind-scenes content 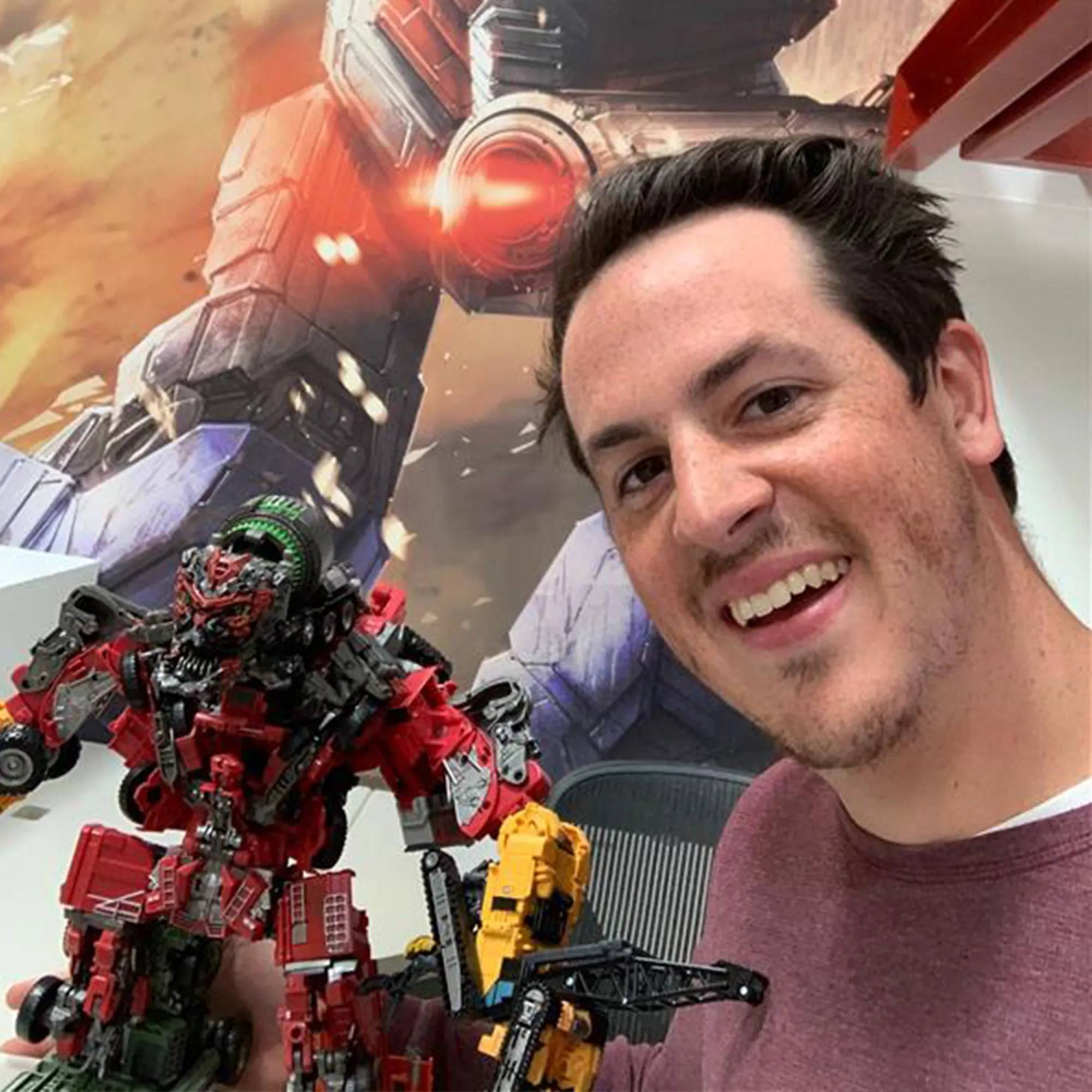 Q: Please tell our fans your name and a little bit about what you do at Hasbro.

A: Hi everyone! I’m Mike, a project engineer on the Transformers team. I’ve been working on the brand for 4 years on a bunch of different segments such as Studio Series, Cyberverse, and Movie Masterpiece. Transformers were my favorite toys as a kid when I got hooked on them watching Beast Wars. I love the challenge of figuring out how each figure converts, and I enjoy telling people I play with toys for a living.

Q: How did this concept come about? You could have made it loads easier on yourself and done one big Devastator.

A: This concept came about as we were thinking of if there were any new cool features we could introduce into Studio Series. Then we thought, “could we make an in-scale, movie-accurate Devastator figure consisting of all triple changers.” We knew it would be a big feat and all-new challenge for the team.

Q: What a massive endeavor, where did you start?

A: First, we had to determine which figures we needed in order to make Devastator in-scale, as well as movie-accurate, and then we had to decide on a timeline for introducing these figures. We figured out Devastator should be built with 8 figures: Mixmaster, Overload, Hightower, Scrapmetal, Scrapper, Long Haul, Skipjack, and Scavenger. Next we decided on a timeline of two years as we planned each year’s figure scales ahead of time.

Q: Why didn't you just release them one after another, why two years?

A: There’s a lot of figures we still wanted to create to help build those amazing scenes across all the movies. With 8 figures to build Devastator, we thought it best to plan it across two years to help balance the figures to incorporate all movies.

Q: But wait, 9 Constructicon figures were released, right? But only 8 combine, what's the deal?

A: So the reason for the 9 figures was mainly due to the scene building. In the movie, Skipjack and Rampage both have the same build or form but are colored differently, Skipjack being yellow and Rampage being orange. Since they were the same build, both figures should have the ability to combine to form the leg of Devastator. We really wanted to allow fans to reenact the scene of Rampage versus Bumblebee in the desert. Then to make Devastator more accurate to the movie we came out with Skipjack to help fans build the ultimate Devastator. This helped to create those two iconic scenes and allows the fans to choose to build Devastator with Rampage or Skipjack. 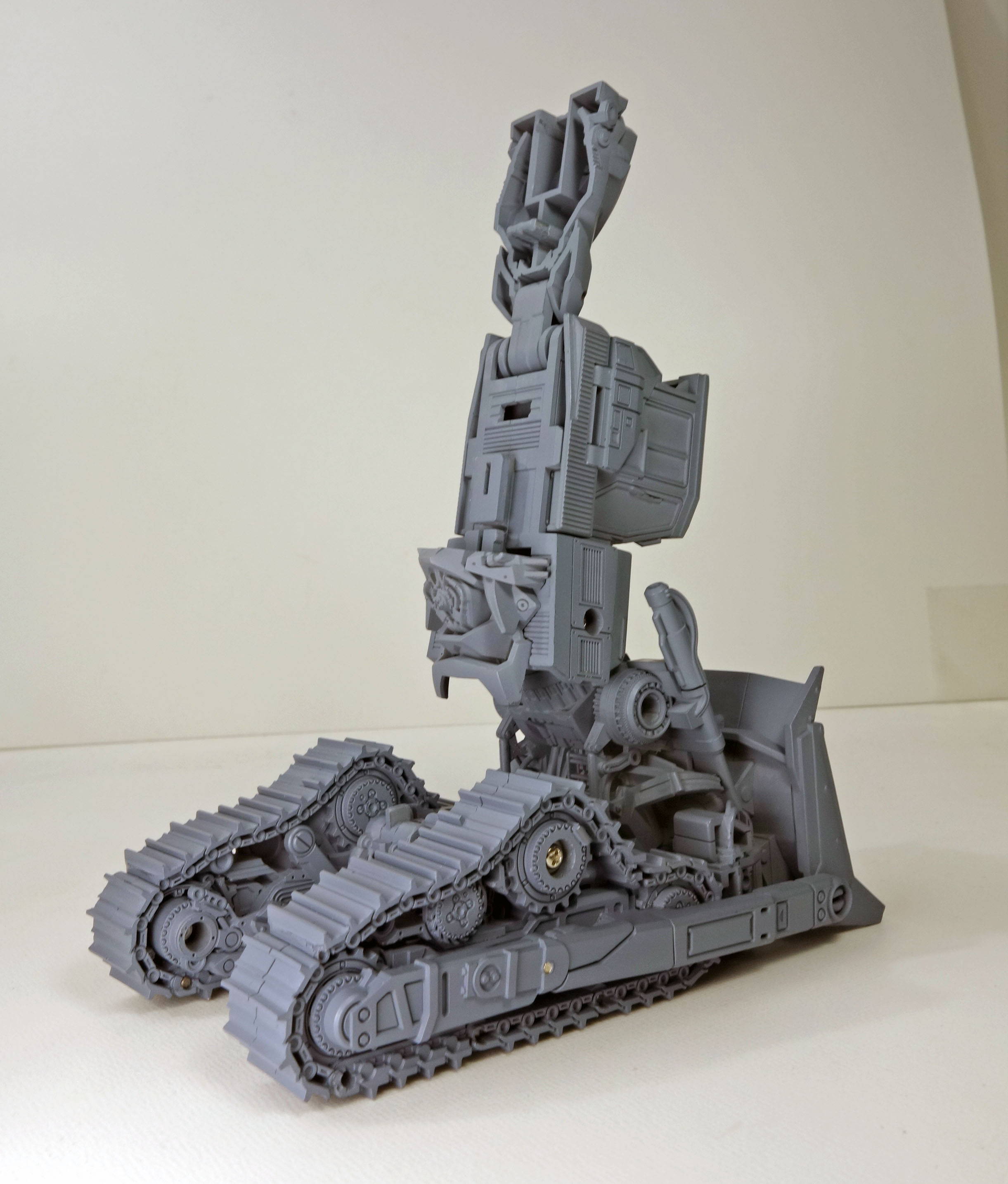 Quick Quiz: Is this Rampage or is it Skipjack? (Hint: It's a trick question)

Q: So this was 8 characters (more or less) with all different figure scales, how did you plan for that?

A: Once we determined the 8 figures, we looked into the framework and mass planning to create Devastator. He has a unique build to him so we re-watched the combining scene a number of times to make sure we understood which figures form which parts of the body. But then we had an even bigger decision to make: What scale should each figure be? We decided that the limbs had to at least be Voyager scale to have the correct proportions. 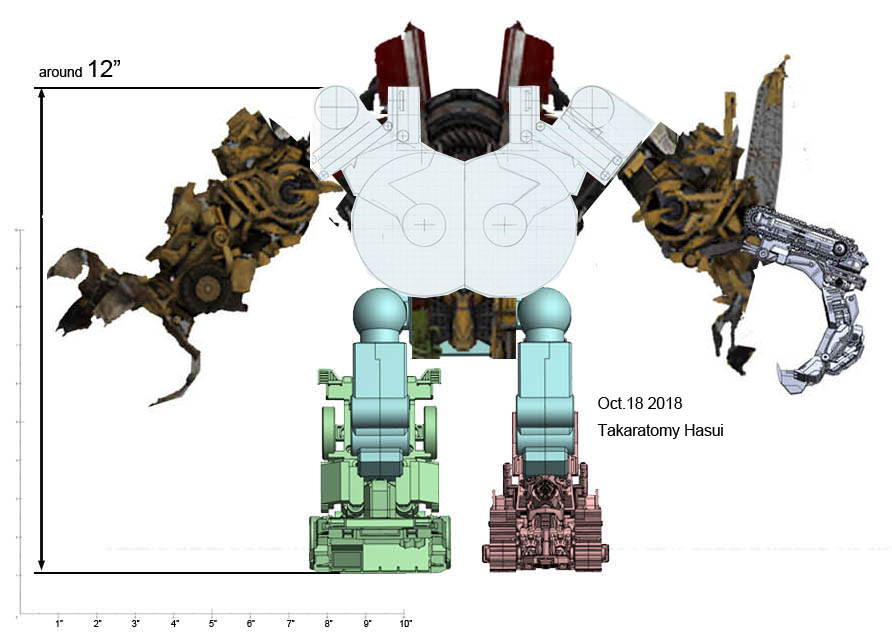 Framework and mass planning for Devastator

This led to Scrapper, Long Haul, Skipjack, and Mixmaster being Voyager scales. However, when watching the scene we noticed that the left arm was formed by two figures: Scrapmetal and Hightower. So to keep the arm in-scale we decided these figures would be best developed as Deluxe scale figures. Last was the upper torso and lower torso. We actually thought of two options for this. (1) Scavenger being a Commander scale figure and Overload a Voyager or (2) Scavenger a Leader scale and Overload a Leader scale. We decided to proceed with option 2 of both Leader scales to fit in our existing scales, but more importantly for strength and stability. Having the lower torso as a Leader scale with more mass helped to improve the stability of Devastator. 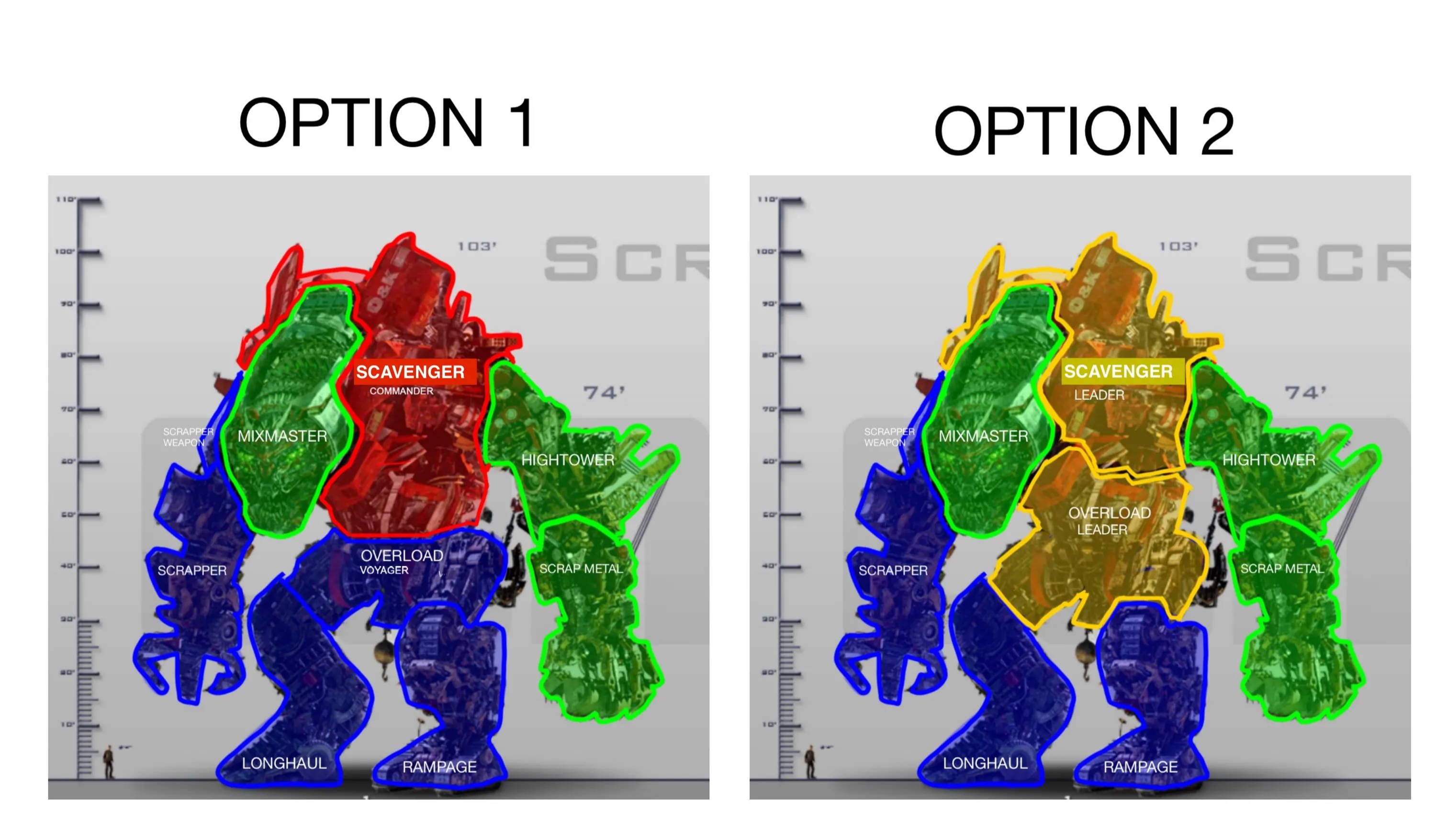 These are the two options 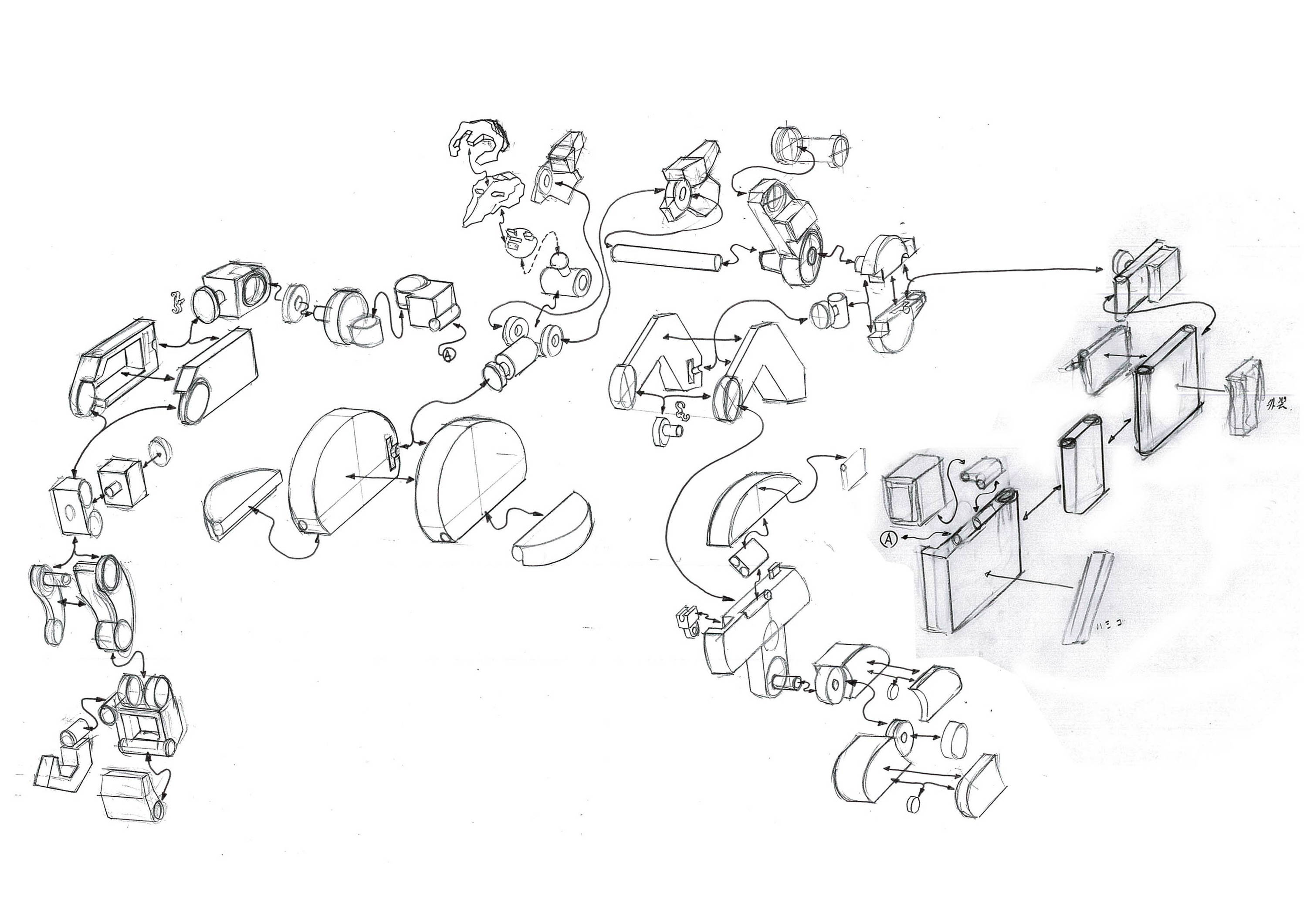 Q: And then you had to figure out how they were all going to combine, and over the course of two years, what was that like?

A: It was definitely a big challenge. Typically, in the past we've developed all combiners in a single year or maybe even in one single item like Titan scale figures. Therefore, to make a combiner across multiple years was an all-new challenge. Jetpower Optimus Prime was a great first test for us to see how to plan two separate items and scales to combine across a big time gap. For Devastator, the first major step was figuring out the connections for each figure. 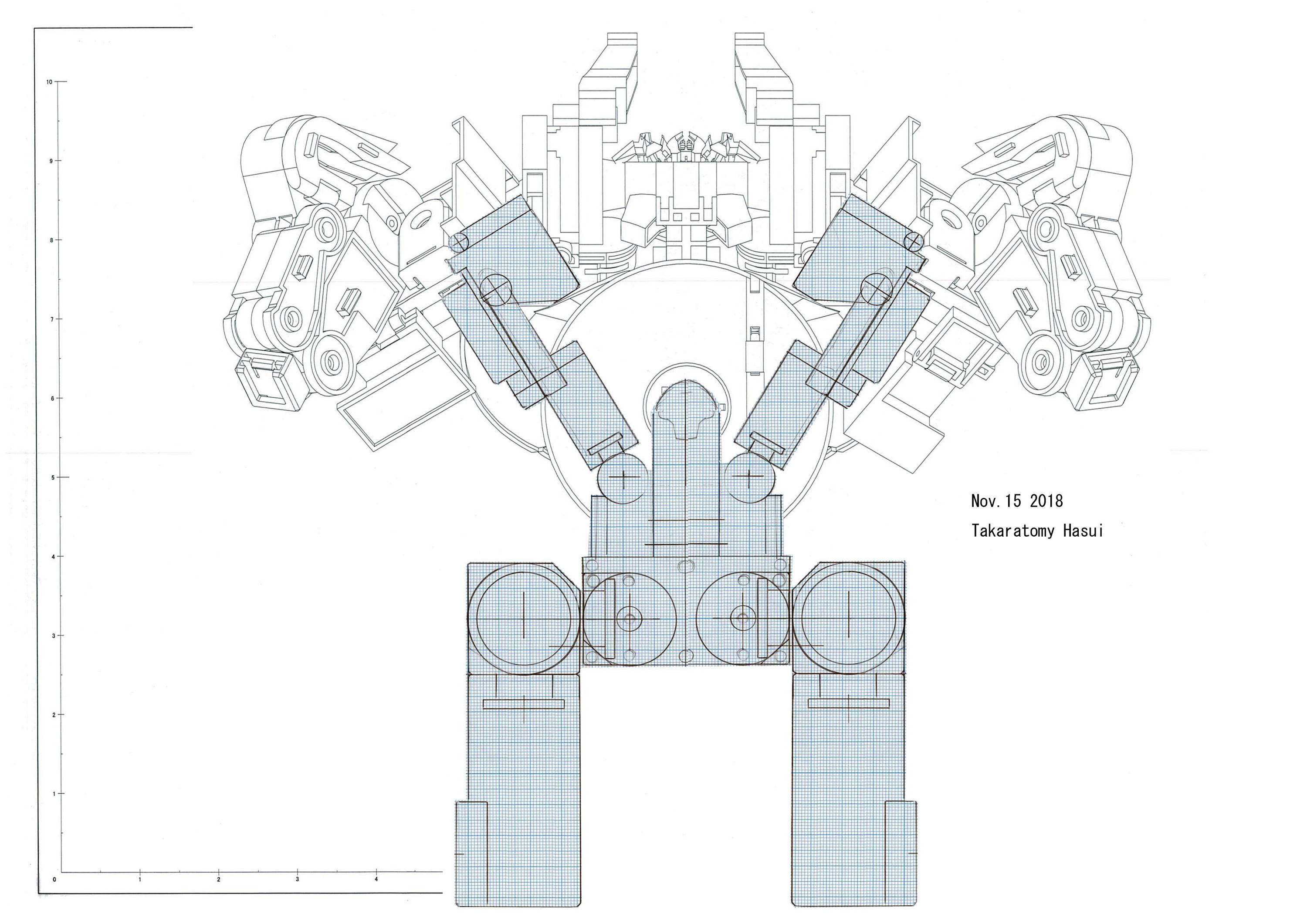 We developed a block model to help us decide on connections for each figure. We tested a few different connections to determine which joint was strong enough to join the chest to the arm, and the lower torso to the legs. Once we had the connections locked down, we would focus on sculpting and designing each individual figure based on which would come out first. We would take their initial block model and begin to construct details over the top of the models. The connections and framework were key because once we determined them, we really couldn’t stray from it further down the timeline. And a fun secondary challenge to this was engineering strong combiner joints for Devastator that would hide away nicely in each individual Constructicon vehicle mode. 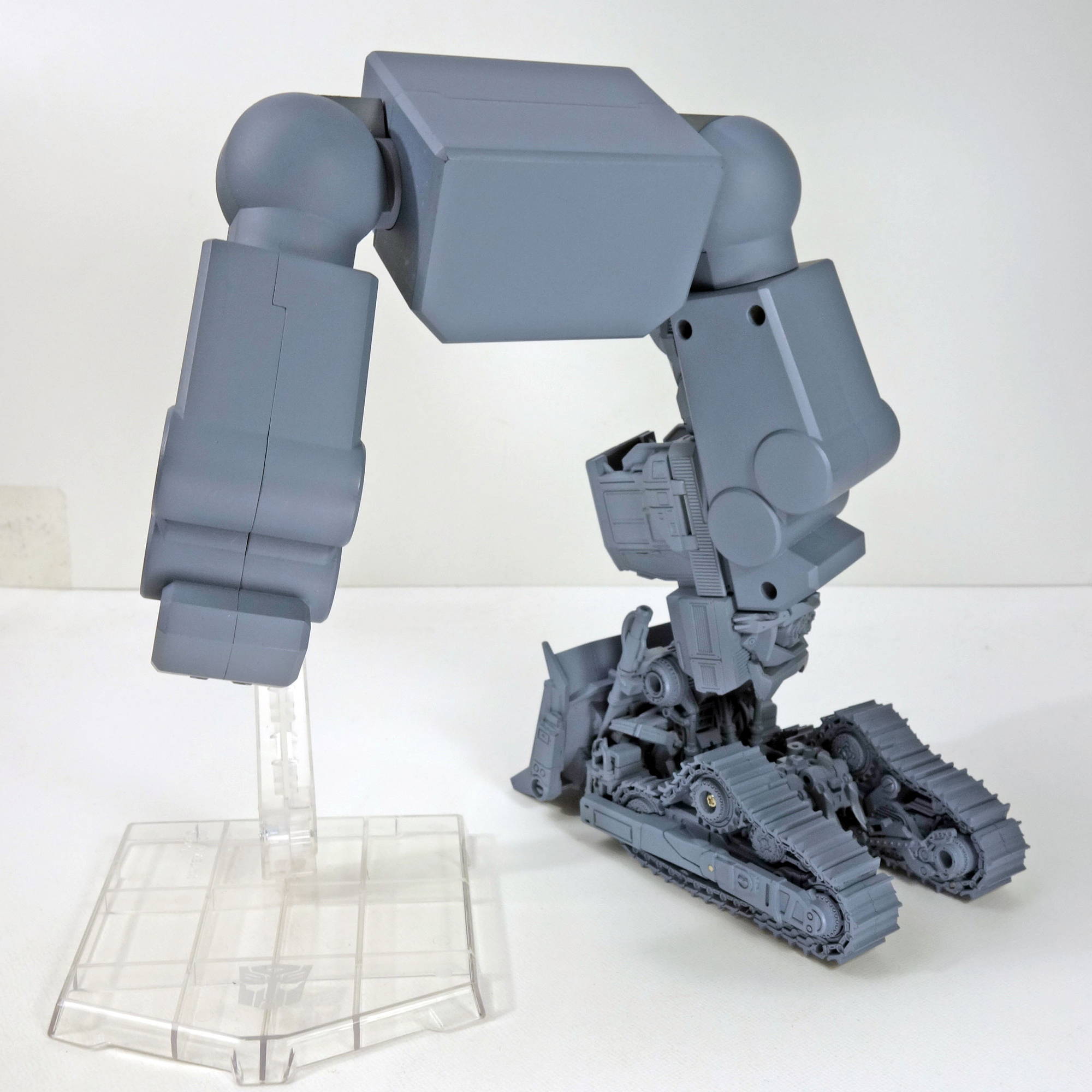 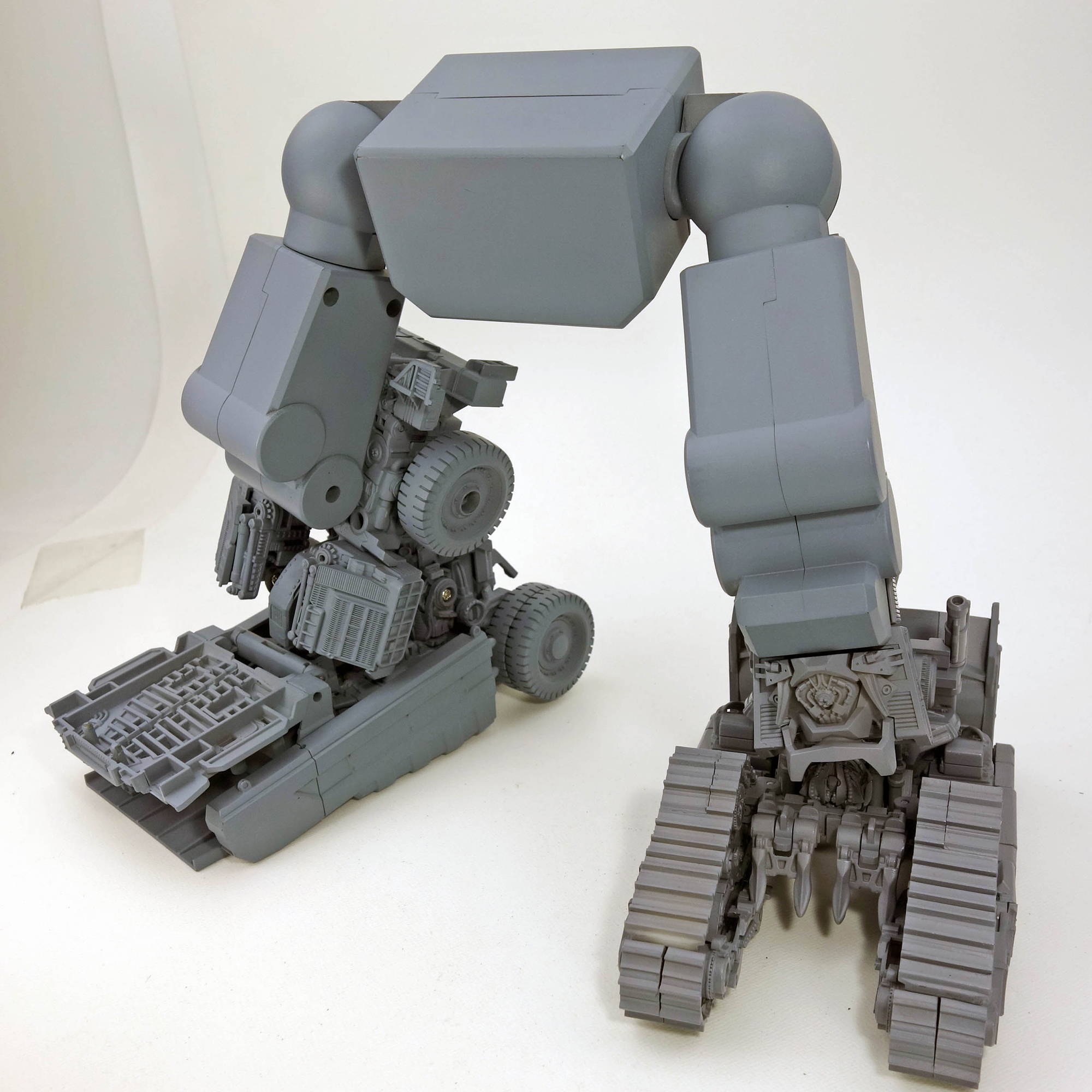 Developing prototype models to confirm connections of the legs. This is Long Haul and Rampage/Skipkjack.

In the image below, we had just started creating the second year of figures for Devastator in 2020 and were solidifying the connections between the upper torso and lower torso. 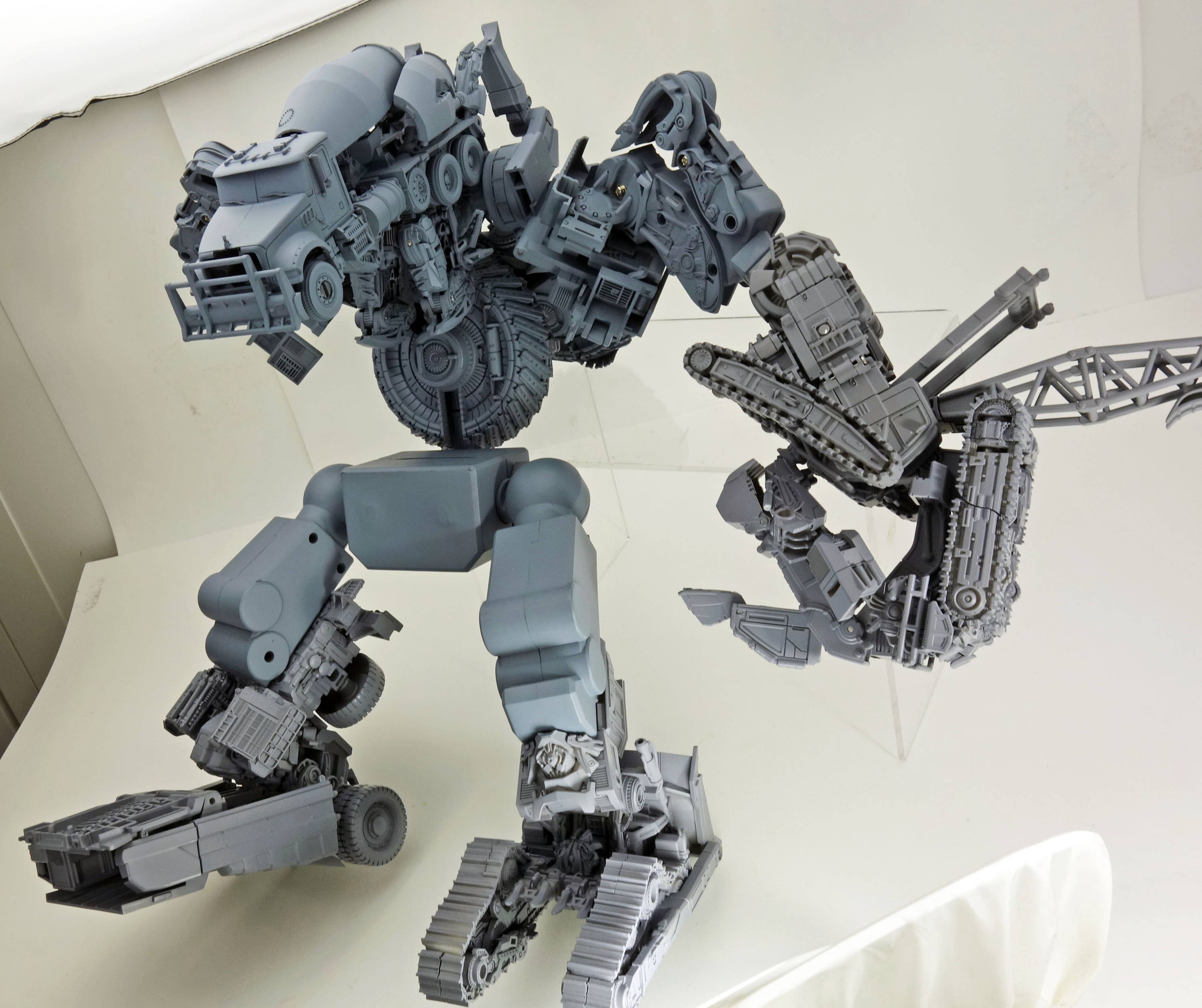 As you can see above, we didn't have everything figured out yet. Behold, the incredibly intimidating: Truckfacetor or Mixface. 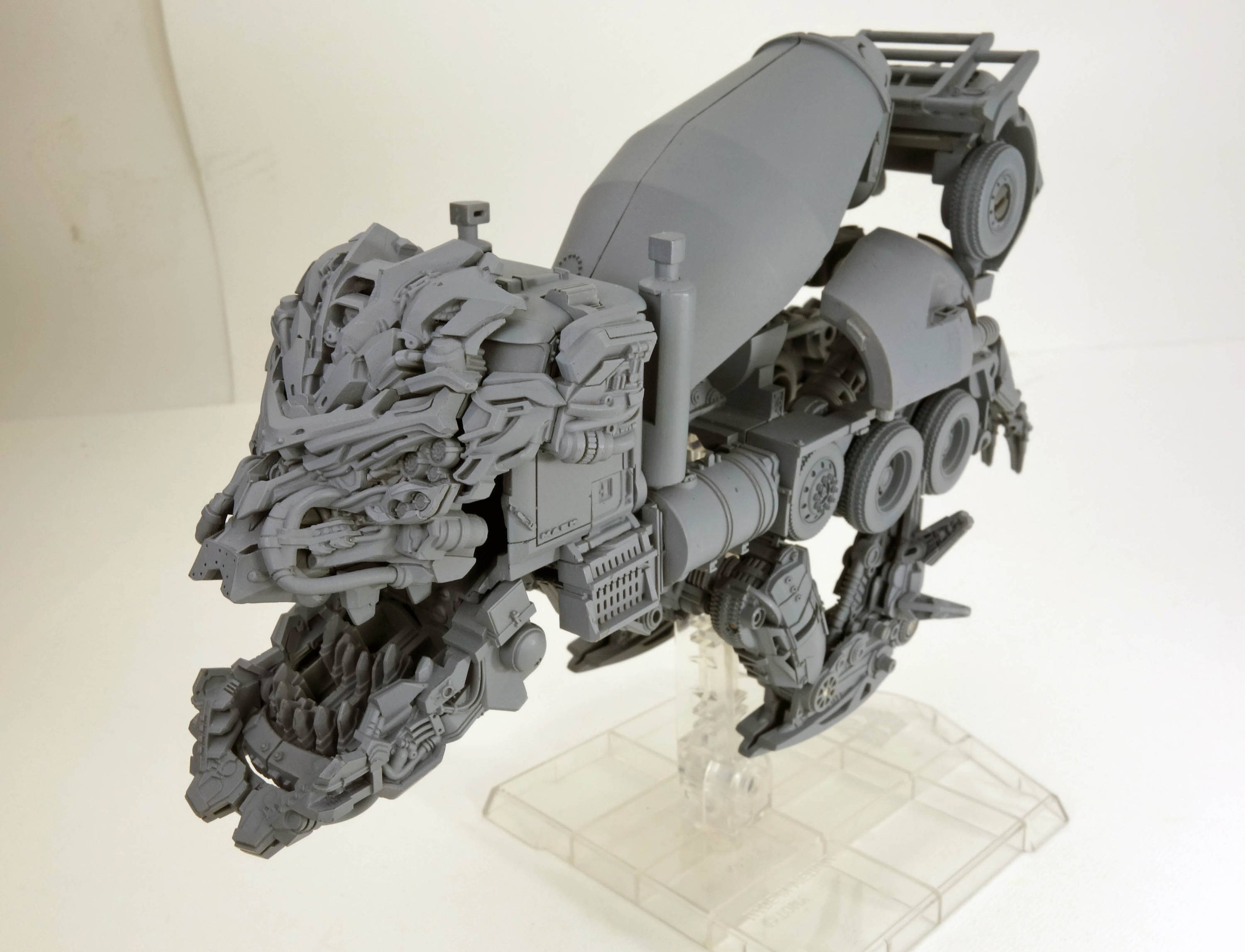 Here is the endgame Devastator face.

Q: Throughout this whole process, what was your biggest challenge as an engineer?

A: My biggest challenge was ensuring the functionality of the Devastator figure when combined across the two-year timeline. It was a tricky matter due to the fact that once a figure was released, we couldn’t go back and modify it to fit better with future releases. Therefore, we really needed to ensure early figures were strong and functioning properly. If we had to make any changes to help Devastator combine, we had to modify the current or later figures so they'd work with any figures that had already released.

Q: Anything else you want to tell us about Devastator?

A: He was an absolutely amazing figure to create and surely one of our biggest challenges to undertake. We think he is a perfect addition to the Studio Series line, standing at approximately 14 inches, and we had a ton of fun working on him. We really hope you all enjoy him!

Let's Break it Down, Piece-by-Piece: 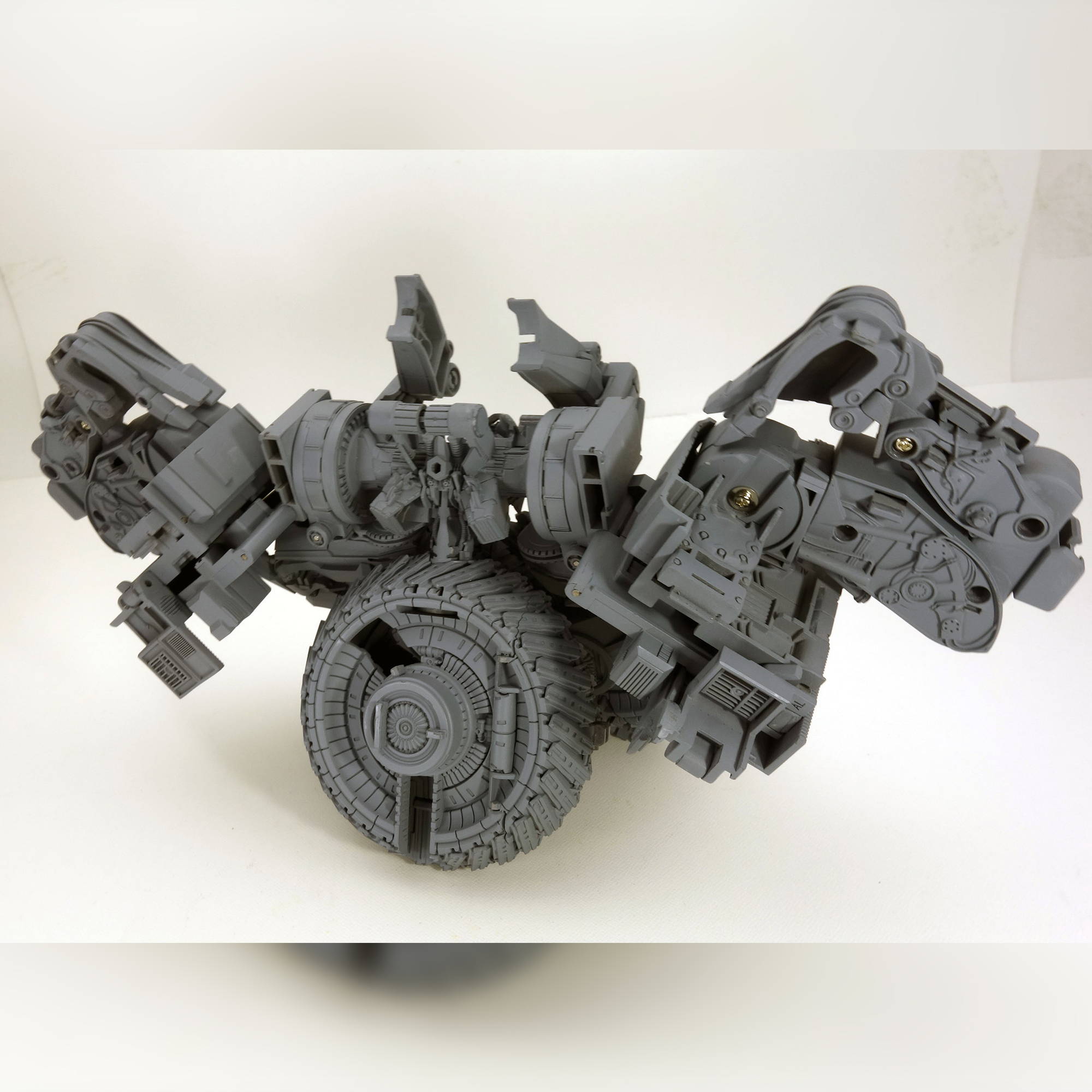 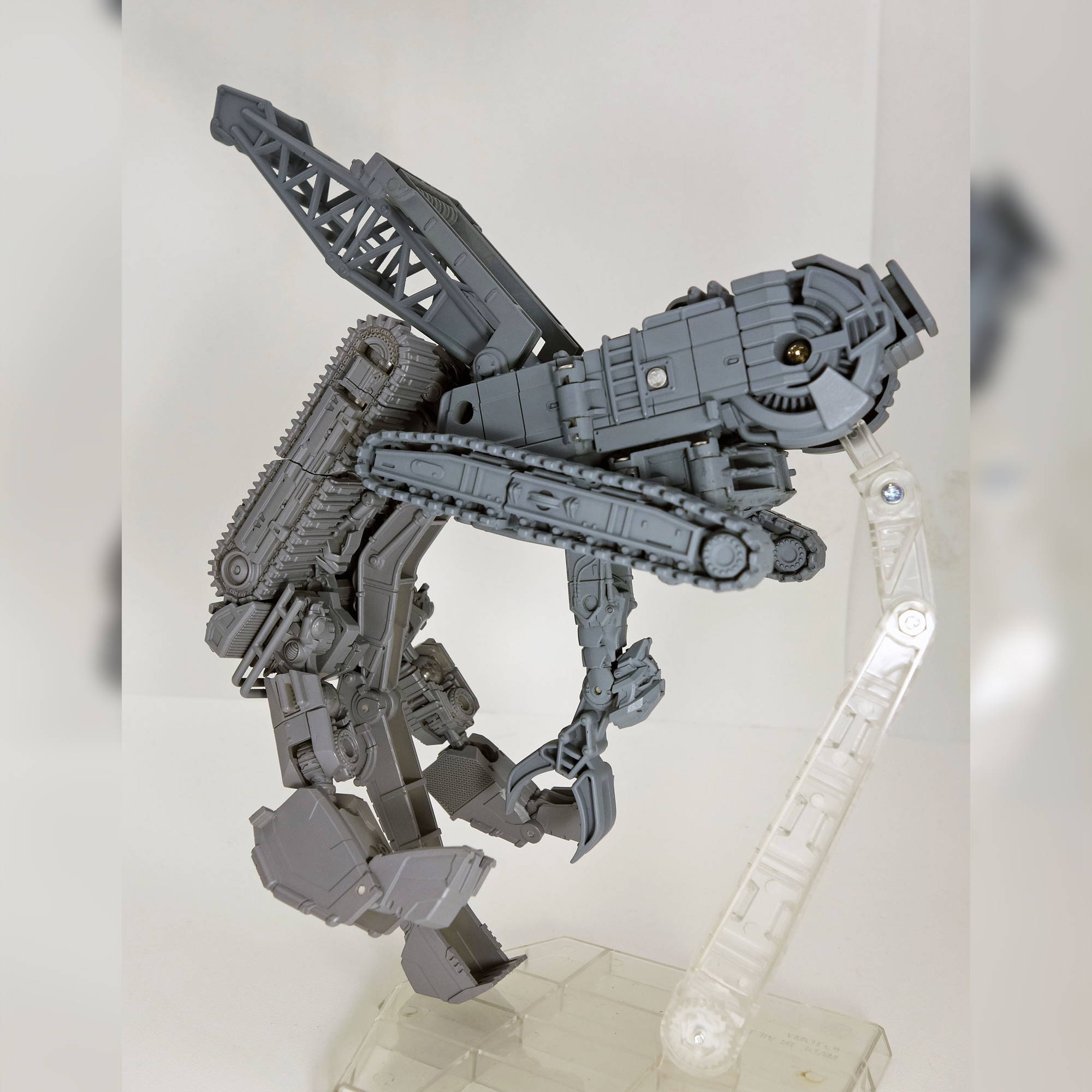 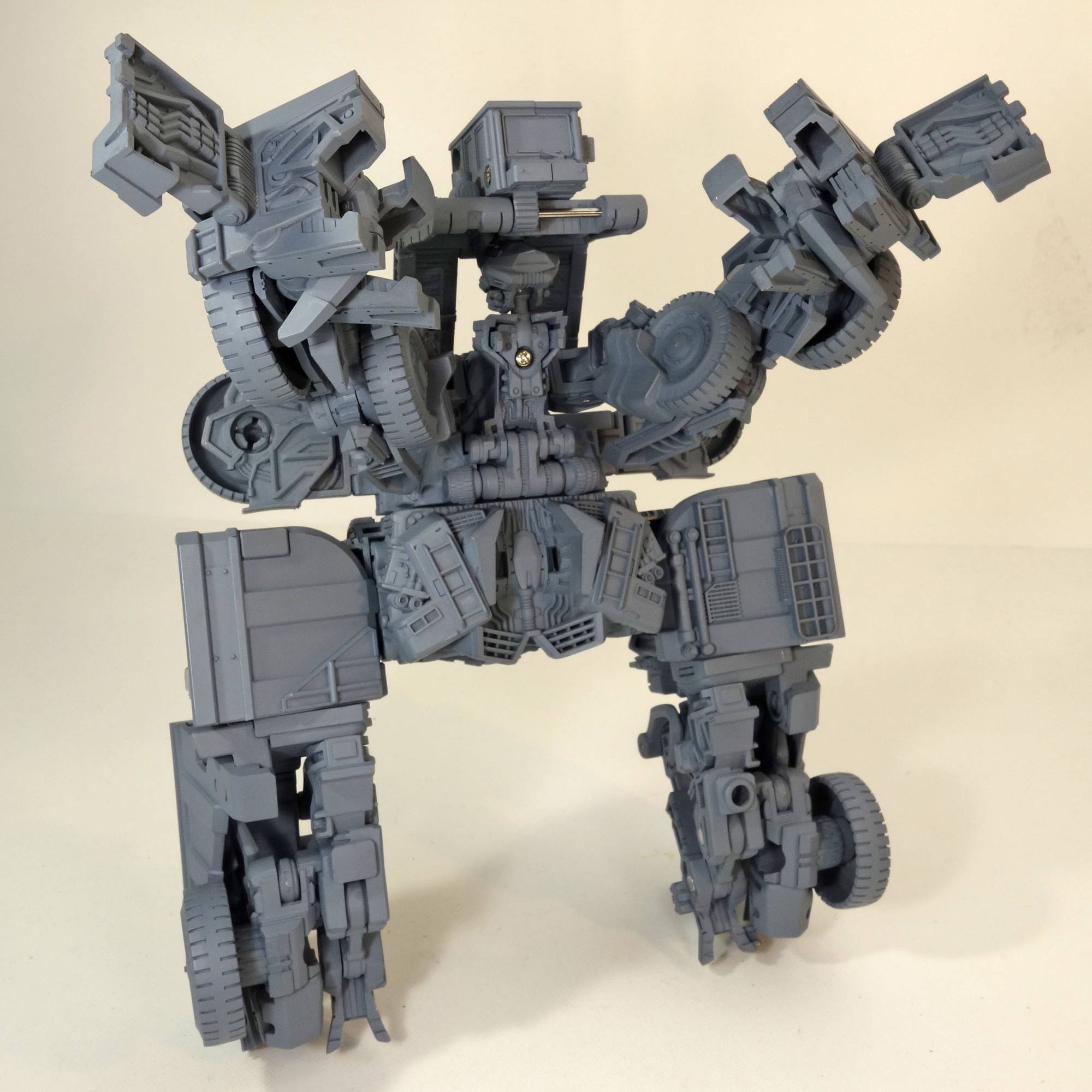 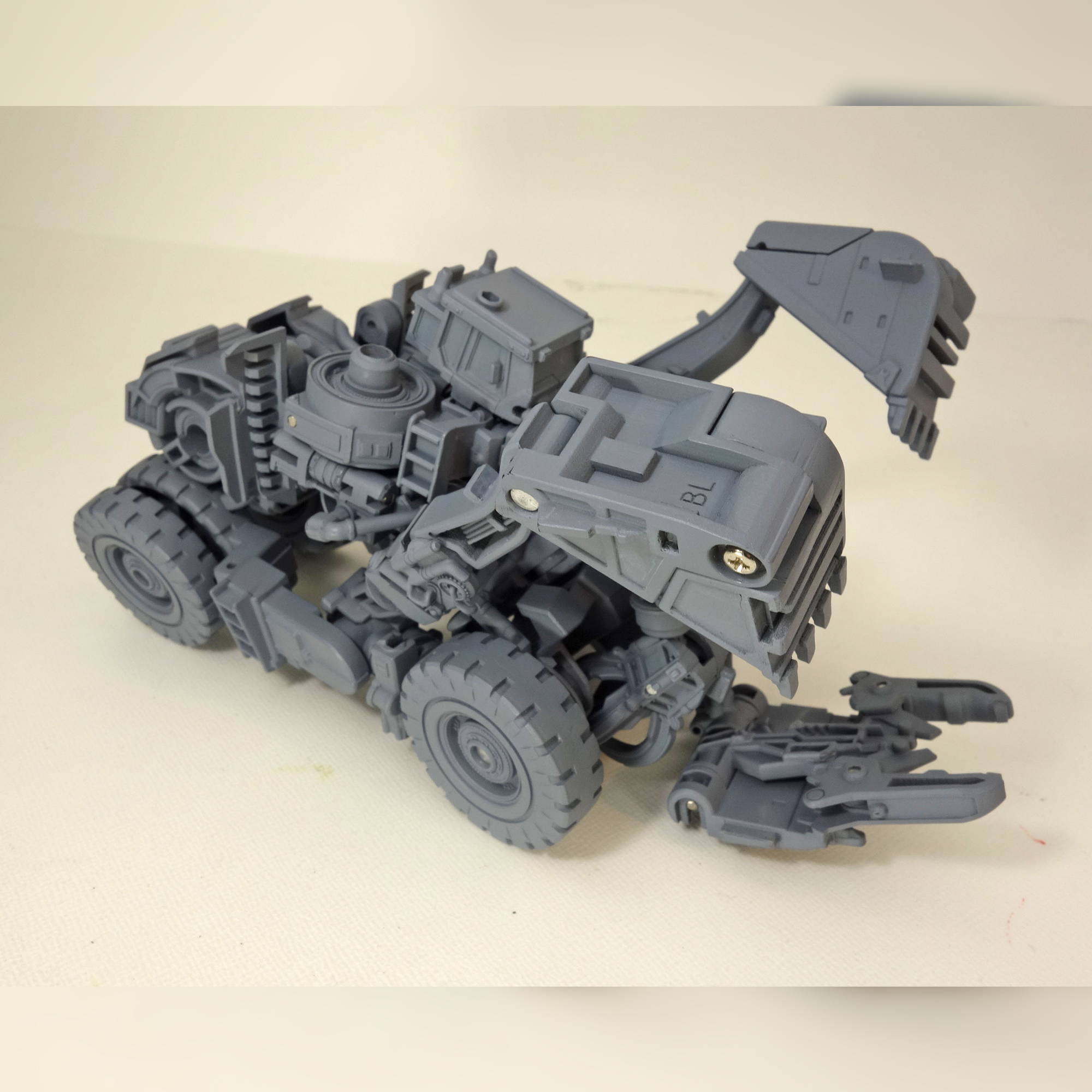 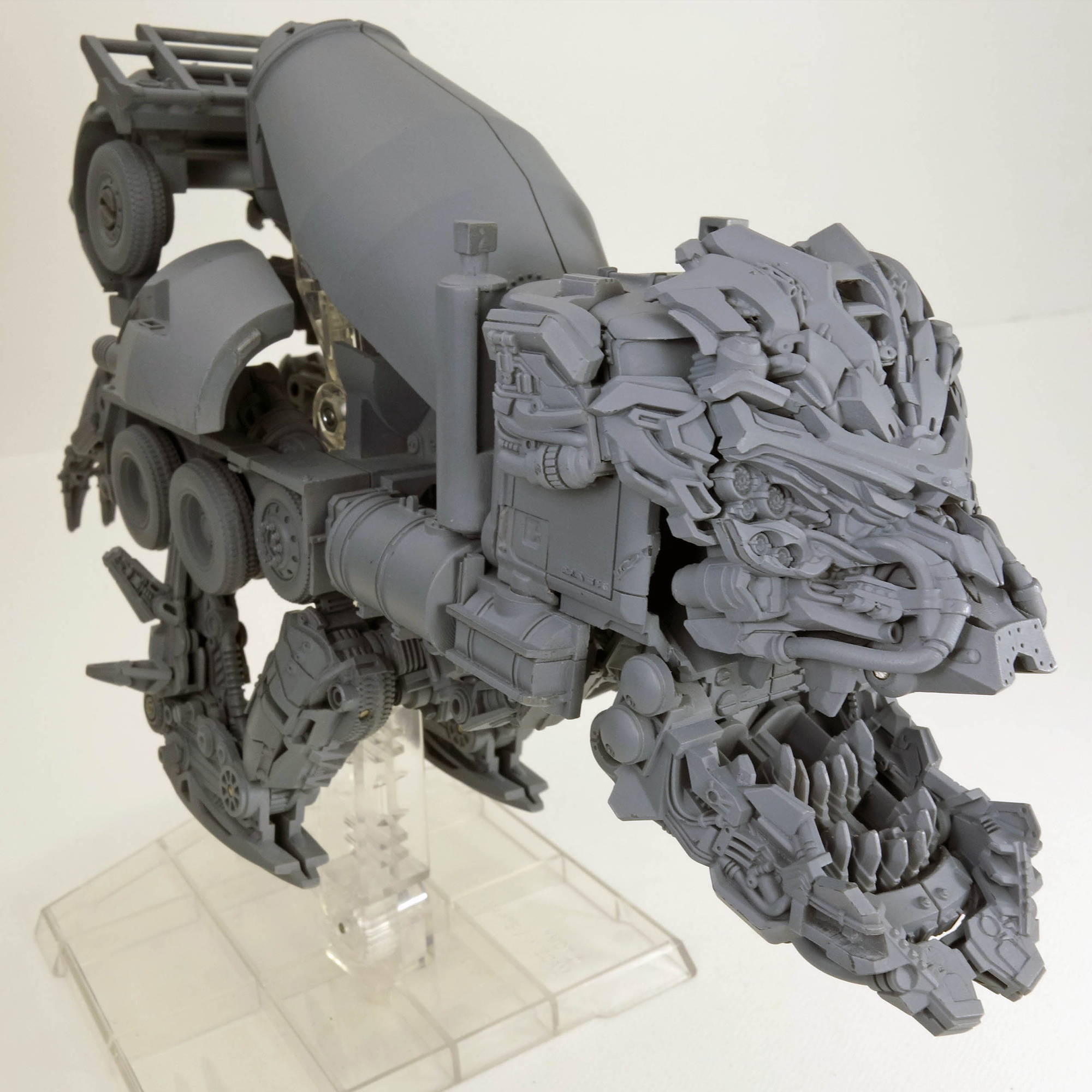 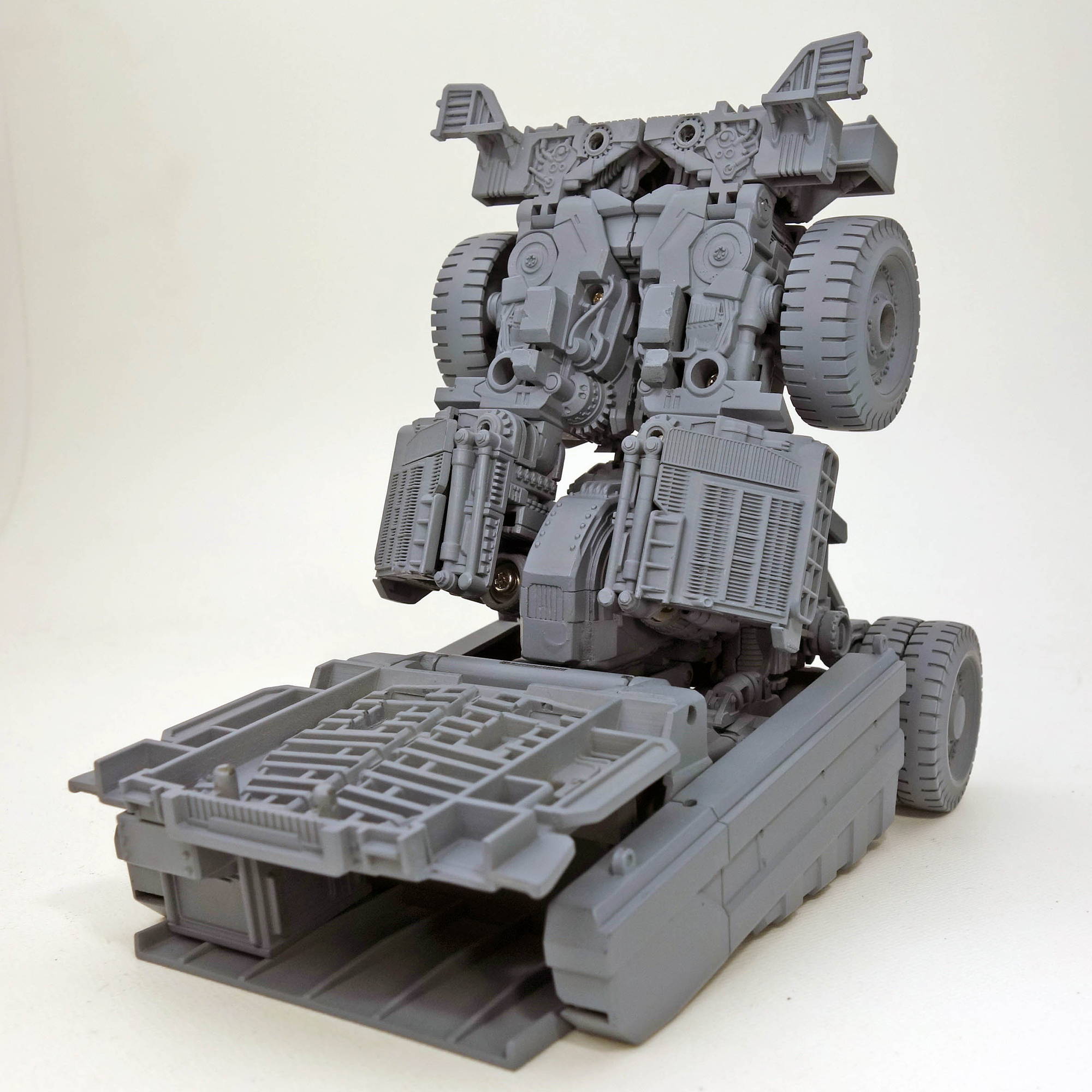 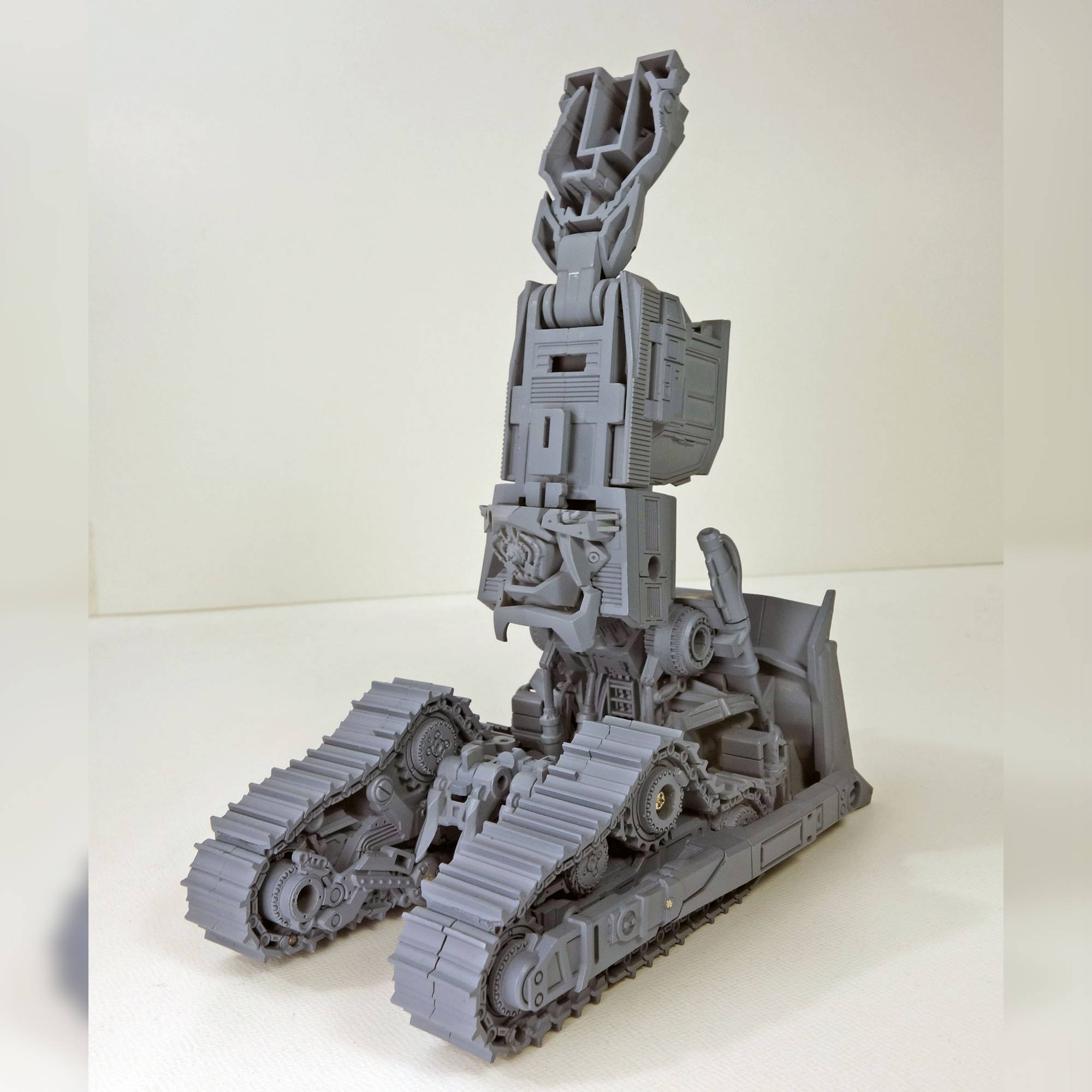 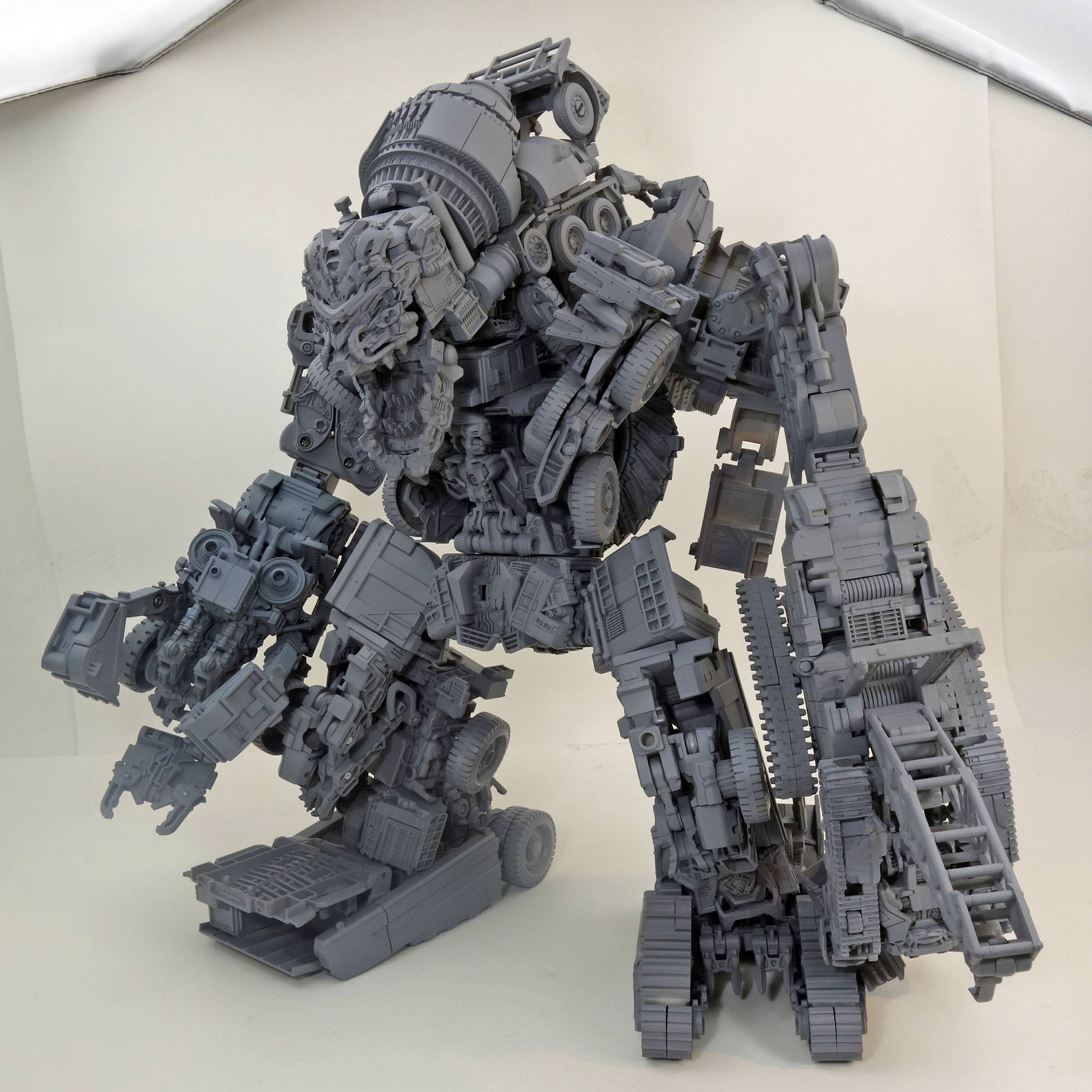 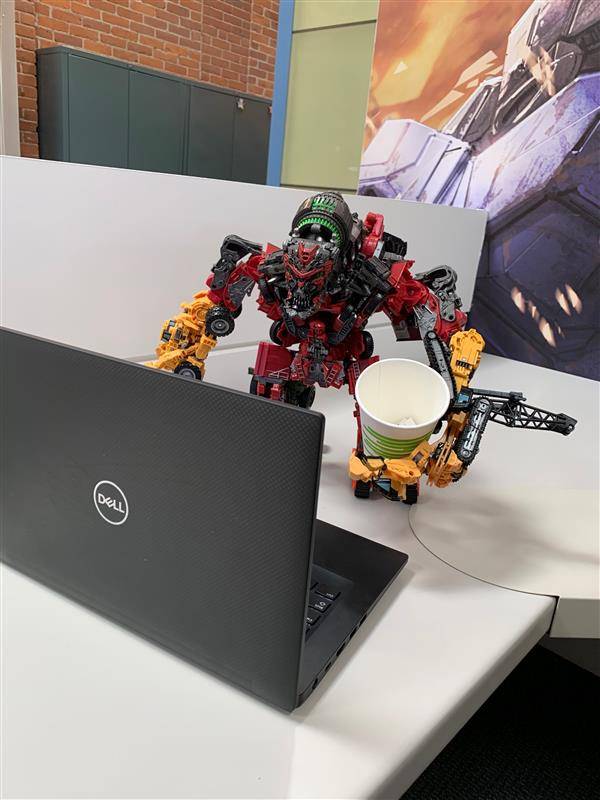 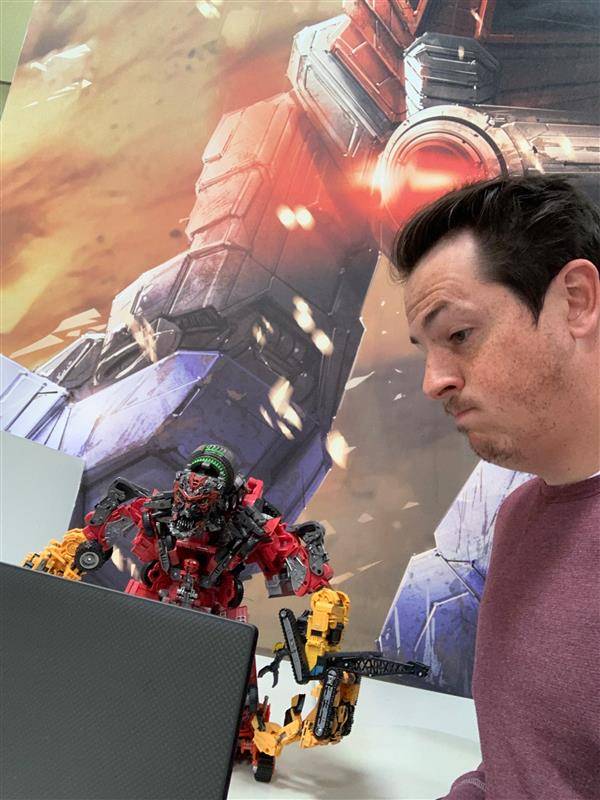 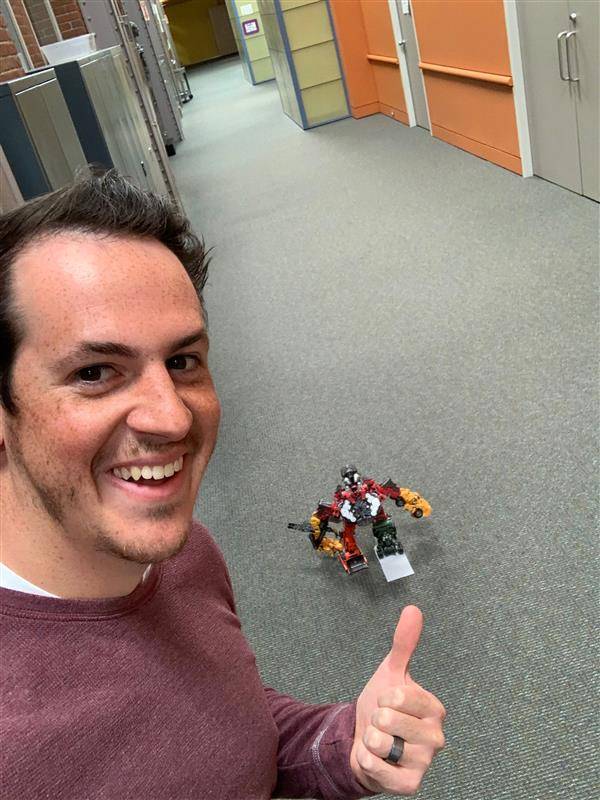 When Devastator thinks he's all big 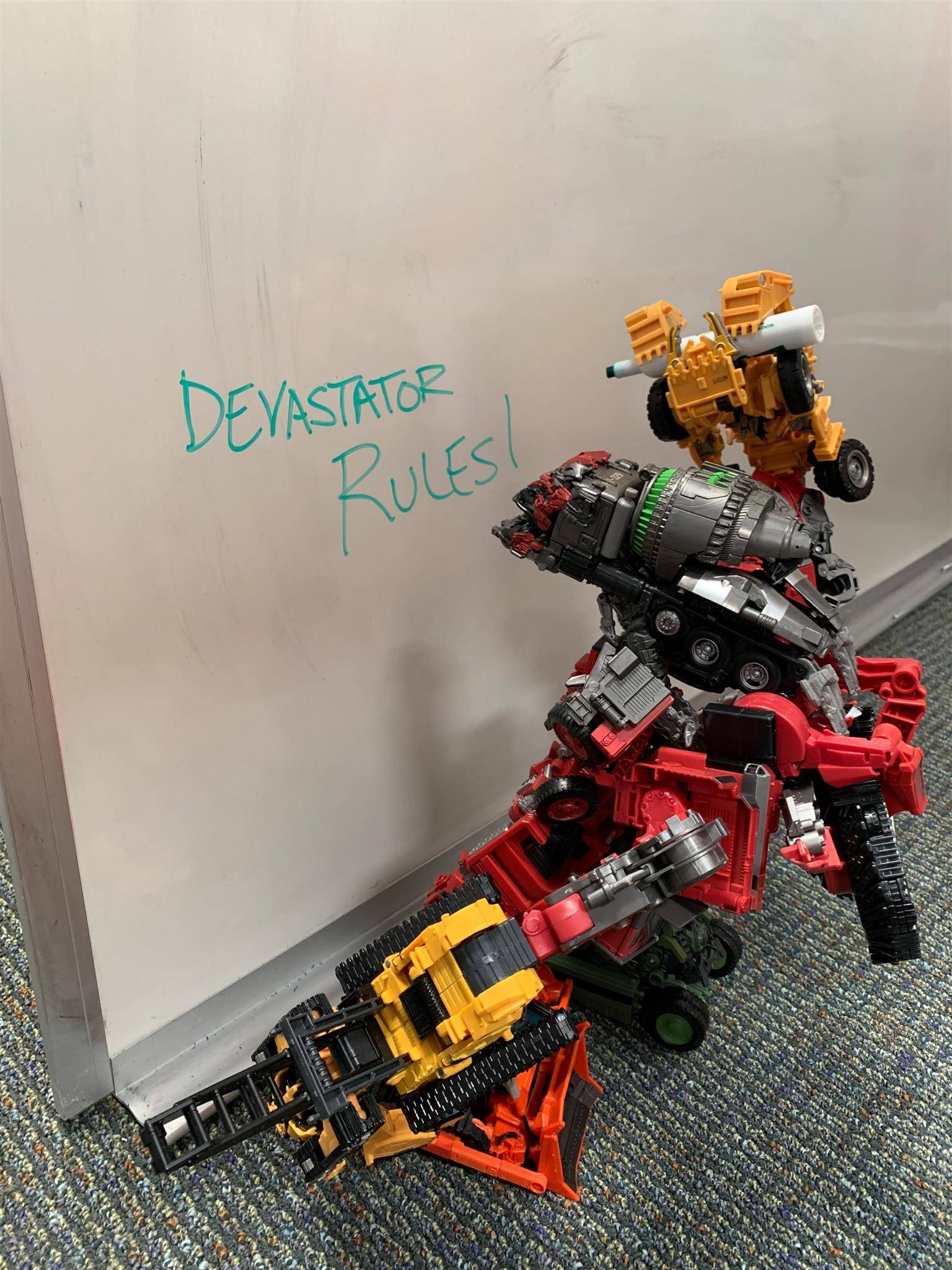 One of our more productive brainstorming sessions